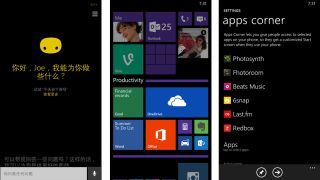 Cortana hits UK and China, while Live Folders and more rock up

Microsoft has officially unveiled its first major update to Windows Phone 8.1 since it launched the latest version of its mobile platform.

The big news is that the update will see Cortana - Microsoft's answer to Siri - break out of the US, with the Beta version hitting China and the UK, while an Alpha opt-in version of the personal assistant will touch down in Canada, India and Australia.

Cortana herself is also been given a few extra features in the update, and Microsoft is encouraging US users to ask her to "do an impersonation" once they've updated.

Another feature coming with the Windows Phone 8.1 update is the inclusion of "Live Folders" allowing users to group apps together on their homescreens.

The lack of folders is something which has been a bug bear since the arrival of Windows Phone 7, and it's good to see Microsoft finally providing this functionality.

Microsoft is also promising a faster, better performing Xbox Music application with the WP 8.1 update, plus it's added more features to it including Kids Corner support and a new "quickplay" function of recent activity.

There's a range of other additions in this update including enhanced security, a new Apps Corner for businesses to lock down various applications and new functionality for the Store Live Tile providing updates on the latest apps.

Developers will be able to get their mitts on the new Windows Phone 8.1 update from next week, while any of you currently rocking a WP 8.1 device can expect it to land on your phone "in the coming months."