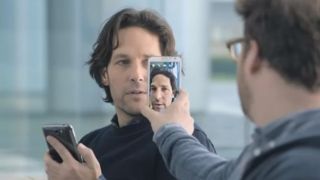 Samsung's latest The Next Big Thing commercial will air during the Super Bowl, but the Apple fanboy-bashing we've seen in the past appears to have run its course.

Instead, the two-minute spot, which will go out to US audiences during the most expensive advertising slot of the year, features Hollywood jokesters Paul Rudd and Seth Rogen and an Apple-free experience.

Rogen and Judd are eventually gazumped by Miami Heat basketball star LeBron James, who has recently featured in ads for the Samsung Galaxy Note phablets Stateside.

Is the war won?

The advertisement, which was released on Saturday ahead of its TV spot, is a marked departure from Samsung's previous attempts to shame those buying Apple devices.

Previous 'Next Big Thing' commercials have made fun of Apple loyalists lining up outside of the company's stores waiting for new iOS devices, excited by the headphone jack moving from the top to the bottom of the iPhone 5 and spouting nonsense like "I could never get a Samsung, I'm creative."

It was a phenomenally successful campaign in which Samsung somehow succeeded in making Apple seem uncool.

However, perhaps the company's US marketeers believe that war is now won, with Samsung sitting pretty on top of the sales charts around the world?

However, while the A-List-infused spot that'll air during the big game made no mention of Apple, the teaser released on Friday did appear to make a few subtle references to the company's legal struggles with Cupertino over the last couple of years.

It's about time someone had a sense of humour over this...