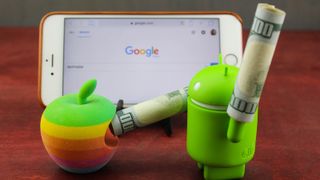 Apple and Google may be fierce competitors, but that doesn't mean the two companies have turned away working with each other from time-to-time. Case in point: we've learned that in 2014, Google paid Apple $1 billion dollars to direct traffic to its search engine above all others.

In the same court transcript that disclosed the amount of money Google has raked in on Android (hint: so many zeroes), Bloomberg has brought to light the search-related agreement struck between the two companies. It's also noted in the document that someone privy to internal information shared that, "at one point in time," the revenue split between Apple and Google was 34%. What isn't clear is who got the short-end of the straw during that stage of the deal.

As the transcript points out, Apple's past dealings with Google have been unknown to the public. But, now that the details surrounding the deal are in the air, it makes you wonder if any sort of similar business agreement is still ongoing.

I have my doubts, as Apple has displayed an apparent shift in favor away from using Google as its default search engine toward other, non-Google offerings in recent versions of iOS. One instance of this change is when iOS 8 brought on a change to display Bing results ahead of Google in Spotlight Search.

It could be just business, or there could be more to it than that. Maybe Tim Cook's very public lambasting of Google and other Silicon Valley companies that reportedly profit off of customers' information hints that the two companies have since severed the line of communication based on ethical differences. But, unless the transcript continues to drop more juicy details, we may never find out.