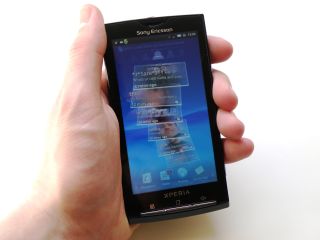 Update #2: And we're back on! Sony Ericsson has taken to its blog to announce that the roll out of the Sony Ericsson Xperia X10 Android 2.3 update has officially begun.

Unlocked handsets are set to get the software notification within the next week, at which point you'll be able to download and install Gingerbread using a PC and the companion software.

Update: It seems that one of the keen beans over at Sony Ericsson HQ hit the publish button a few days early and the Android 2.3 update isn't out for the X10 yet after all.

Mattias Holm, Sony Ericsson's head of product pr has blogged: "As some of you have seen we have communicated on www.sonyericsson.com that the Gingerbread software update for Xperia X10 is available.

"Unfortunately that information was a bit too premature. The launch is imminent and timing according to plan but we just need some more days before we can push the button."

The company has announced the arrival of the update on its website, as well as listing the benefits which include pinch-to-zoom while internet browsing and some updates to Google maps.

The upgraded Gingerbread software also brings Facebook integration, the ability to act as a Wi-Fi hotspot, USB tethering and a new photo widget to the handset.

Unfortunately, some Xperia X10s that are locked to specific networks may not be able to download the new software, although Sony Ericsson hasn't been abundantly clear on which ones are affected.

It was just yesterday that we brought you the news that the update could land any day this week, and it's lovely that Sony Ericsson hasn't let us down.

After all, this is a software update that nearly didn't come to pass, with Sony Ericsson announcing that the Éclair update would be the X10's last, before scratching that and announcing the release of 2.3.

From Sony Ericsson via Unwired View