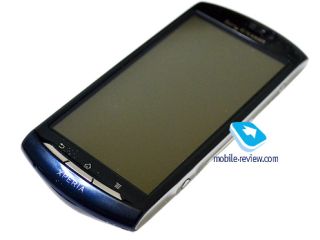 What will it be called, the Sony Ericsson Vivaz 2? The Hallon? The MT15i? Nobody knows.

A mobile phone review site has got its hands on the Sony Ericsson Vivaz 2 (aka Hallon) and whipped up an extensive preview.

We first brought you news of the Sony Ericsson Hallon, the successor to the Vivaz, back in December when our sources informed us that Sony Ericsson would ditch Symbian and go with Android for the reboot.

Mobile Review took a good long look at a pre-production model, and decided that the Hallon is "a well balanced and skilful device, something that we had not seen from Sony Ericsson for a long time now".

Slightly larger and heavier than its predecessor, the Vivaz 2 has "a 'quality' feel", according to Mobile Review.

The screen is described as larger than the Vivaz's 3.2-incher but smaller than 4-inches, with 580x854 pixel resolution – it's also using the Sony Bravia engine to power the Super LCD display like that of the Sony Ericsson Xperia Arc.

With Sony Ericsson's proprietary interface on top of the Android 2.3 (Gingerbread) OS, the company has decided to ditch MediaScape and instead go with the default Android apps for music, photos and videos.

TimeScape is still on board, however, with some extra 3D visuals to jazz things up.

The menu interface has been updated too, and is described as "a bit of an improvement". What an accolade.

As the offspring of the Vivaz, you'd expect video recording to remain a focus and Mobile Review was quite enthused about the Hallon's abilities, saying that video up to 720p "performed flawlessly".

The camera sensor is an 8-megapixel affair, the same Exmor R sensor as that of the Sony Ericsson Xperia Arc which we detailed earlier this week.

Inside, we're looking at a 1GHz Qualcomm processor with 512MB of RAM to back it up; the previewer also reckons it can get around 3 days of phone-time out of the battery, which is impressive if true.

If Mobile Review is to be believed, we should see the Sony Ericsson Hallon (if that is indeed it's real name) get a UK release in April 2011, with UK pricing around £300.

We're expecting this to be one of the new phones debuted at Mobile World Congress 2011, where Sony Ericsson is expected to be bringing out the Xperia Play (AKA PlayStation Phone) too - so stay tuned for our in-depth hands on Sony Ericsson Vivaz 2 review.