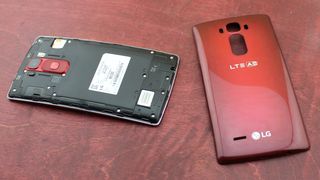 Our LG G Flex 2 was overheating during benchmark tests

With great power comes great responsibility. Today's smartphones and tablets have more processing power than what NASA had to work with back in the 60s to get human beings on the moon.

In just a short period of time, we've gone from single-core to quad-core mobile processors being the norm, and for the Galaxy S6 and Galaxy S6 Edge, Samsung is giving consumers worldwide a taste of its Exynos octa-core chipset.

While power efficiency has improved, it's still no easy feat to power our mobile devices of today. From Full HD and beyond displays to the hoard of apps we use, there's a lot to keep up with. In keeping up with the Joneses, things can get a little heated. In most cases, it's nothing out of the ordinary. In the alleged case of Qualcomm's Snapdragon 810, it's far from it.

Overheating claims began this past December when production delays were rumored. According to an inside source, the Snapdragon 810 would overheat after reaching a certain voltage. It was also around this time benchmarks such as this one started appearing, showing significantly lower numbers than expected. Thermal throttling, i.e. limiting clock speeds due to excessive heat, was suggested.

With the announcement of the LG G Flex 2 in January, those claims would rear their ugly head. G Flex 2 was the first smartphone to utilize Qualcomm's latest flagship chipset, the Snapdragon 810, an octa-core chipset capable of powering a 4K display.

"I am very much aware of the various concerns in the market about the (Snapdragon) 810, but the chip's performance is quite satisfactory. I don't understand why there is a issue over heat."

However, it was already too late. Samsung had planned on using Qualcomm's Snapdragon 810 in the Galaxy S6, but something made them change their mind, and instead go with their Exynos chip. It's been noted that Samsung stands to lower costs by using chips built in-house. There's also the expectation that the Galaxy S6 and Galaxy S6 Edge will sell in record numbers. As the old saying goes, time is money.

With the Snapdragon 810 facing delays due to production issues, Samsung simply couldn't risk not having enough new devices on the market in time for launch.

Rather vaguely, mere days after an executive spoke out, LG confirmed in a conference call that there were issues with an "initial batch" of Qualcomm Snapdragon 810 processors, but the situation had since been resolved. Overheating was not brought up as an issue, and after digging around on social media, it's difficult to find a single mention of an owner who's dealt with overheating.

Currently, the Qualcomm Snapdragon 810 is made by TSMC, which stands for Taiwan Semiconductor Manufacturing Company. TSMC has an established track record manufacturing chips for major players like Apple and Samsung. In fact, a recent report from Patently Apple said the company is expected "to earn all of Apple's A9X orders (for the next generation iPad) and most of the A9 (for the next generation of iPhone)."

TSMC uses a 20nm process for the Snapdragon 810, a chip size that is also manufactures the same chips powering the iPhone 6, iPhone 6 Plus and iPad Air 2. It's very possible the "issues" reported back in December stemmed from Qualcomm's design of the Snapdragon 810, and not TSMC's process. Then, it simply took some time for Qualcomm to remedy the problem, which we still have no confirmation what exactly that problem was. The company denied any reports of the issue being related to overheating.