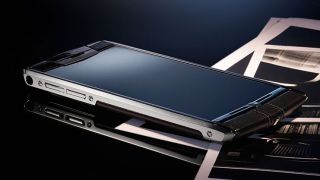 Internet chatter surrounding Sapphire screens on smartphones has really hotted up in 2014, with the iPhone 6 heavily tipped to sport the super-strength glass, but it's something the industry initially thought wasn't even possible.

First up Sapphire screens aren't actually a new commodity in the mobile world. You may know that it features on the iPhone 5S, covering the TouchID scanner on the front and camera lens on the rear, but it goes back much further than that.

What you may not know is luxury smartphone manufacturer Vertu has been developing and using Sapphire screens for 15 years and it's currently on its fifth generation of the technology.

During the late 90s Sapphire glass was already being heavily used in the watch industry, and Vertu wanted to harness its high levels of durability on its lavish devices.

"When we first went to the watch industry and said 'look, we like what you guys do [with Sapphire glass], but we want it this [mobile phone screen size] big' they said 'it doesn't happen, you can't do it'," explained Jon Stanley, Head of PR at Vertu, in an interview with TechRadar.

This meant the Hampshire-based British firm had to go out and find its own Sapphire source and create its own supply chain, one that was capable of creating crystals large enough to meet its requirements.

"We found one or two suppliers in the late 90s who we then started working with to get the bits we wanted."

Back to the present day and Vertu now has Sapphire suppliers around the world who are capable of making single sheets of glass large enough to cover the 4.7-inch full HD screen of the firm's latest flagship device - the Signature Touch.

It's not just a simple case of getting the glass shipped over - that's easy, as Vertu CEO Max Pogliani told us.

"When we receive the finished Sapphire screen we have a special room, a chamber, where we put the Sapphire together with the display.

"This is the most difficult part of the process because you need to ensure you don't get any dust trapped between the layers.

"It's a process we do by hand, one by one, with a single person doing each phone."

Vertu also adds an anti-reflection coating to the diamond cut and polished Sapphire glass before installing it, by hand, into a handset.

Sapphire screens aren't exactly easy to produce and Vertu experiences very low yields from its supply chain, which isn't a big issue for a small firm, but it's something which could spell trouble for the likes of Apple who will be looking to mass produce it.

John Stanley, Head of PR at Vertu explained, "Until we know what people's approaches will be to Sapphire crystal its almost impossible to judge from a supply chain viewpoint the impact it may have on Vertu.

"It Sapphire did get widely adopted you'd naturally imagine the price would come down," but mass production probably won't see much change in Vertu's production as it's set up a supply chain which caters perfectly for its needs, and its needs only.

"From our side we know how long the journey can be and how little yield comes from each crystal grown to know we'd have trouble timings production for the stuff that we do by 10.

"We are a niche brand, we have lower production runs and it suits us very nicely."

So while Vertu continues merrily on its way churning out low runs of 5.1-inch Sapphire glass to cover a 4.7-inch display the likes of Apple and co. have a potential headache to tackle when it comes to mass production.