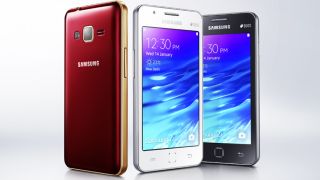 The Samsung Z1 is finally here

When we caught our first glimpse of a Tizen-powered phone from Samsung, the world was a simpler place: the iPhone 4S was the hottest phone on the market and the London Olympics was about to get underway. Nearly three years later, you can finally get your hands on an official handset.

Or at least you can if you live in India. As we suspected this Linux-based OS is going to be used to grow Samsung's share of the market in developing nations. As well as Tizen, the freshly unveiled Samsung Z1 phone rocks a 1.2GHz dual-core processor, 768MB of RAM and 4GB of internal storage.

As per the rumours last month, it's sporting a 4-inch WVGA 800 x 480 display and has a 3.1-megapixel camera around the back.

People in developing nations such as India are picking up mobiles in their droves, and the Z1's mission is to get more of them using Samsung kit. It comes with a free entertainment package and Club Samsung membership, as well as built in antivirus protection.

"We have customized the Samsung Z1 to meet these unique, entertainment-focused needs of local Indian consumers for a personal and reliable mobile experience," said Hyun Chil Hong, President and CEO of Samsung India Electronics.

Whether or not Tizen will make it to the US and UK on a more high-powered device remains to be seen - we're just relieved that the OS has finally seen the light of day on a smartphone.