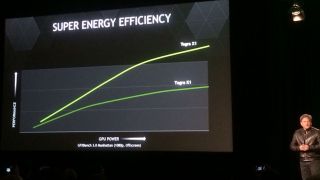 After unveiling the new GeForce GTX 980 and GTX 970 graphics cards, and finally releasing Grid streaming, what could Nvidia possibly have left to reveal at CES 2015?

Nvidia CEO Jen-Hsun Huang dubbed it a "superchip," and it is rather impressive. The Tegra X1 counts 256 Maxwell GPU cores, an eight-core 64-bit CPU and 4K video capabilities at 60Hz.

Huang said the Tegra X1 is energy efficient thanks to its Maxwell roots, but it can also run state of the art engines that any desktop computer or current-gen console can. Thanks to the Tegra X1, Unreal Engine 4 could run on a mobile device, Huang said.

The new chipset features the first GPU with FP16 and is, according to Huang, the first mobile processor to reach the one teraflop summit.

The question is, what to do with all those flops?

Huang moved from mobile processors to mobile in the traditional sense by introducing Drive CX, a digital cockpit computer.

The Drive CX demo was a flashy 3D rendering of maps, gauges, and an infotainment system, but instead of being housed in a center-console tablet, Nvidia's in-car vision extended to just about every in-car surface.

Powered by Maxwell GPU technology, the Drive CX can produce up to 16.6 million pixels inside a vehicle.

The system is OS agnostic. During the onstage demo, Nvidia showed off customizable features such as matching the Drive CX UI to real-world materials, demonstrating to both consumers and car makers they have some freedom when it comes to Drive CX's design.

Tegra X1 will begin appearing in the first half of the year.

Techradar's coverage of the future of tech at CES 2015 LIVE is brought to you courtesy of Currys PC World. View Currys' range of Smart technology here and computing here