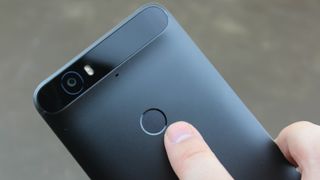 The Samsung Galaxy Note 7 has landed, but we're not done with big Android phone launches for the year, as a pair of new Nexus handsets are still to arrive – and when they do they could have gesture controls built into their fingerprint scanners.

That's according to Android Police, which got hold of an image showing that if you swipe down on the rear-facing scanner the notification tray will descend, giving you a quick and easy way to check your notifications.

It's not a ground-breaking feature, as Huawei has built this into a number of its flagship smartphones include the Mate 8 and P9, but it is genuinely useful and time-saving.

The site claims to be "extremely confident" that it's a real feature, but notes that it could be removed before launch and is unsure whether it will arrive on the Nexus 5X and Nexus 6P or just the new Nexus M1 and Nexus S1 (aka Marlin and Sailfish).

The other notable thing in the image is the very blue color of the phone, which is believed to reflect an 'Electric Blue' shade that the Marlin and Sailfish handsets might be available in.

And if you fancy getting your hands on a blue Nexus we also now have a better idea of when you might be able to, as a "trusted source" of Droid Life has suggested that October 4 could be the launch date for the new phones.

Interestingly, if the new Nexus phones do launch in October it would mean the LG V20, which is arriving sometime in September, would likely be the first new handset to run Android 7.0 Nougat. We knew it would be among the first, but for another brand's phone to get Nougat before Google's own handsets would be a strange state of affairs.

However, existing Nexus handsets like the 6P and 5X will still probably be the very first phones to run Android 7.