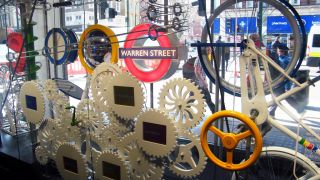 Google has opened its first-ever physical store and chose London to be the city to host it. In fact, the store has been open since Thursday March 5 but the company has kept it on the down low to make sure it was all up and running properly before making any fanfare.

It was pretty easy to hide as Google's "first-ever" physical store isn't like you'd expect, it's in fact a section of a Curry's PC World, the one on Tottenham Court Road to be exact.

Considering the behemoth Google is today it's a strange move to hide its first flagship store inside a far bigger store near to Warren Street station.

Apple's flagship store is right next to one of London's busiest underground stations and Samsung is a little way down the road on Europe's busiest shopping street - you'd think Google would want to join in on the action near there.

The space Google has created is nothing revolutionary and we expect it's more of a proof of concept for Google to begin rolling out its own flash dash branded stores à la Samsung's high-street move last year.

James Elias, the UK marketing director for Google, said: "The pace of innovation of the devices we all use is incredible, yet the way we buy them has remained the same for years.

"With the Google shop, we want to offer people a place where they can play, experiment and learn about all of what Google has to offer; from an incredible range of devices to a totally-connected, seamless online life."

Chromebook laptops are laid out to experiment with much the same as you'd find in any other Currys PC World across the country. They are now joined by Moto 360 and LG G Watch R smartwatches showing off Android Wear, the Nexus 6 smartphone and Nexus 9 tablet. No sign of Google Glass, unsurprisingly.

The phones and tablets are surrounded by relaxed seating to encourage you to sit and play for a little longer than you normally would, but it's much like you're in a shoe shop waiting for your significant other to choose between the red or the black pair.

The rest of the space is filled with Google's own physical toys.

There's a big screen wall with electronic spray paint allowing you to decorate the iconic Google Doodle in your own way, a curved display set up with a joystick panel to explore Google Earth and a booth to learn all about Google Chromecast.

The whole experience has a bit more of the brands experimental and fun element to it like Google is trying to imitate the Science Museum, but in a good way. Spray painting a wall would never fit in with the clinical Apple Store experience.

But it does highlight the fact Google hasn't really got enough products to fill an entire store considering a lot of the brand is made up of software experiences that are tough to convey to customers.

Unlike the Apple Store Geniuses aren't to be found here but there are Google representatives available to help you talk through products, but this is much the same as you'd find in any technology shop across the country.

There's no alternative to the Apple Genius Bar here either with no way of fixing your previously purchased products.

The shop window is filled with a creative interpretation of the Google logo made out of different households items such as a bike in a Mouse Trap fashion.

There's even a crank to help the customer set it going whenever they want.

Elias said, "We think it's a genuinely unique try-before-you-buy experience." It's certainly not a unique experience, and is nowhere near as brave as Samsung or Apple's attempts to sit front and centre on the high street.

But Google may be using this as an experiment to bring its own stores to the high street and the more fun toys dotted around the place make for a more interesting experience than its major competitors offer.

Google will certainly need a few more products or experiences to fill a full size space of its own but with Android Wear, Nexus devices and Google's other physical devices continuing to grow we may end up seeing Google Stores in the next couple of years.