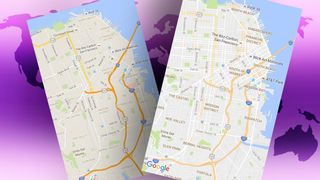 The old Google Maps (left) versus the new (right)

The modern traveler wouldn't be caught dead without Google Maps. From finding restaurants to plotting routes, the triangulation, navigation, and direction app is standard on many a smartphone and web browser.

Thanks to an upcoming update to the wayfinding service, the latest version of Google Maps on iOS, Android and desktop touts an easier-to-read interface and color scheme to make finding your bearings a breeze - shown in the image above on the right, comparative to the old look on the left.

On top of trimming extraneous design elements like outlines on roads, the updated Maps uses color coding to easily pick out hospitals, schools, natural features, water, and even places where there's a lot to do if you're looking to find all the hustle and bustle, as seen by the sections of orange in the video below:

The updated iOS and Android app also is also adding a small but helpful feature: multiple destination routes. If you've ever found yourself constantly adding new directions on each leg of your trip, commute, or errands, this addition may speak to you just as much as the cleaner interface.

In addition to its new look, Google Maps looks to be rolling out a new feature that will trim down data usage.

While not confirmed, Maps may also be playing around with a Wi-Fi functionality that allows the app to continue being useful without relying on a cellular connection, TechCrunch reports.

Google Maps can still be viewed offline, but crucial features like transit routes or directions become unavailable, requiring travelers to eat a few bytes each time they check on their location.