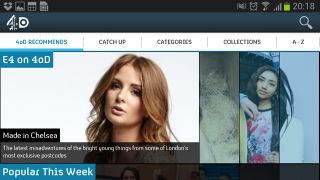 Thanks to the Note II processor's quad-core power, it'll also play back the majority of your quirky file formats up to either 720p or 1080p – something that less powerful Android phones and tablets just can't do.

The video player can even turn your playing video into a floating window, so you can get on with other tasks while your favourite TV show is playing back on your Note II.

Content providers in the UK have wised up to the likes of the Samsung GALAXY Note II with its 5.5-inch 720p HD Super AMOLED display and zippy LTE data speeds, making it perfect for on-the-go video.

Four of the five major television station's content is available on the go, with the BBC, ITV and Channel 4 having developed mobile apps that can turn a portable screen into a pocketable TV. This means that getting your Samsung GALAXY Note II kitted out for TV mobility is as simple as a dip into your Google Play Store.

Encompassing BBC1, BBC2, not to mention the wealth of additional BBC television and radio channels available, iPlayer is the default go-to for most Brits looking for a bit of TV on the go.

Whether it's catching up with Eastenders, drooling over The Great British Bake-off or having a good old giggle to Have I Got News for You, BBC iPlayer has it all.

The app will prompt you to download a second app in order to play content, so don't be alarmed when it does, but once all is downloaded, you'll be set.

If BBC iPlayer had a twin that was subsidised by advertising it would be ITV Player. The app is also free and is a doddle to pick up in the Google Play Store and get watching on.

The ITV Player's interface is presented in a layered and snazzy styling, complete with pretty decent quality streaming; making for an immersive viewing experience on the Note II.

4OD is the catch-up version of Channel 4's TV service, which, as with ITV Player, also features advertising. It's simple to get your head around the clean interface and the app even groups episodes by series, so you can catch up on two or three episodes in one sitting.

The app even has the option to set a pin and set a parental lock for content that's inappropriate for under-18s – perfect for any protective parent who's treated their lucky teen to a Note II.