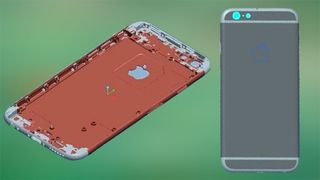 A new week, a new set of leaks for Apple's next flagship smartphone. This time, a set of 3D renderings have reportedly surfaced straight from the hallowed halls of Cupertino's favorite Asian supplier.

Over the weekend, Chinese website Wei Feng (via GforGames) managed to get its hands on a handful of 3D renderings allegedly straight out of Apple's supply chain, which offers yet another look at the forthcoming iPhone 6.

By this point, nearly every aspect of the eagerly anticipated smartphone has been leaked, but the five 3D schematics appear to be further evidence that a big refresh is on the way this year.

Curiously, the renderings are said to have come directly from "Foxconn or its affiliates," and seem to match those used to create dummy units that made the rounds only last week.

For starters, the wider, longer renderings appear to confirm the rumored 4.7-inch display, showing off the more rounded edges of the handset.

Although the Lightning and headphone ports remain largely unchanged at the bottom of the device, the volume keys on the left edge have been elongated, and the power button at top has been moved to the right side.

The other obvious change is the LED flash, which is now shown as a circle rather than the flattened oval from the current generation iPhone 5S model.

Subtle differences to be sure, but something tells us Apple has more up their sleeves than we've seen from the leaks leading up to the Worldwide Developer Conference in just three short weeks.