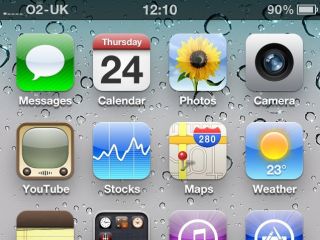 Apple has blamed a display error for the signal error that has blighted the launch of its latest phone, confessing that the network coverage displayed may be far higher than the handset is actually getting and promising a fix.

Although a fix will, of course, not actually improve reception, merely show it as lower in poor coverage areas, Apple has moved to email customers with an explanation.

Interestingly, the fix is for ALL iPhones, which might explain some of the long-standing reception problems that people have noticed since the launch of the first version.

"Upon investigation, we were stunned to find that the formula we use to calculate how many bars of signal strength to display is totally wrong," said Apple.

"Our formula, in many instances, mistakenly displays 2 more bars than it should for a given signal strength," it continues.

"For example, we sometimes display 4 bars when we should be displaying as few as 2 bars.

"Users observing a drop of several bars when they grip their iPhone in a certain way are most likely in an area with very weak signal strength, but they don't know it because we are erroneously displaying 4 or 5 bars.

"Their big drop in bars is because their high bars were never real in the first place."

So, essentially, the problem with Apple's phone is not that touching it affects it that badly, but that the handset was falsely suggesting that the signal was stronger in the first place.

We will issue a free software update within a few weeks that incorporates the corrected formula. Since this mistake has been present since the original iPhone, this software update will also be available for the iPhone 3GS and iPhone 3G.

"We have gone back to our labs and retested everything, and the results are the same— the iPhone 4's wireless performance is the best we have ever shipped," adds Apple.

"For the vast majority of users who have not been troubled by this issue, this software update will only make your bars more accurate.

"For those who have had concerns, we apologize for any anxiety we may have caused."

Oh , and one more thing: "We are also making bars 1, 2 and 3 a bit taller so they will be easier to see." Problem solved then.