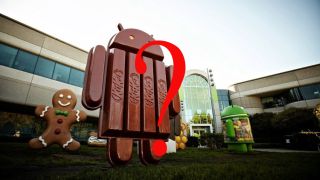 Updates are now coming for the non-Google branded phones

If you hadn't heard Android 4.4 KitKat is out in the wild on the Google Nexus 5, where have you been? It's been months since the launch of KitKat, leaving many owners wondering when their handset is set to get the update.

Unfortunately with different OEMs all adding their own skins and networks having to certify these updates, the roll out of any new Android OS is less than smooth.

The updates are starting to increase in regularity now, thankfully, so here's our guide to which handsets can currently get their hands on the chocolatey goodness, those set for the new software and those that will miss out.

Hopefully we will see the latest Android update land on a much wider range of devices this time, with KitKat supporting devices with as little as 512MB RAM.

This will mean we should see it on new budget devices, and we can hold a little hope that older budget handsets will get a refresh - although it's unlikely manufacturers will revisit their older, cheaper smartphones.

We have been in contact with various manufacturers to get a feel for their update cycles, and we will continue to update this article as news trickles in, so keep your eyes peeled.

Here's our guide to whether or not you're going to get the update to Google's latest iteration of Android, and when those updates should land.

Android is Google's mobile OS, so the Android 4.4 KitKat update was always bound to land on certain Nexus devices. Unfortunately, the word 'certain' is key.

Google is only supporting the Nexus 4, Nexus 7 (both editions) and Nexus 10, with the updates for the tablets now finally here - although shorn of the Google Experience launcher, which seems to be something to do with the larger devices being unable to handle the transparent bar at the bottom of the screen.

This is taking a while though - not everyone has got the update yet, but it is rolling out slowly, so stay tuned to the 'System updates' section of your menu to see when it arrives.

The certain devices getting the KitKat update also include the Play editions of the Samsung Galaxy S4 and HTC One, but not the Samsung-made Galaxy Nexus.

Reasons touted are that it doesn't fit in Google's 18-month update window, and that Texas Instruments no longer make mobile chips, so is unable to provide support.

Updated: SamMobile has obtained an internal document detailing which phones will be updated to Android 4.4 and when. The 4G-equipped versions of the Galaxy Note 2 and Galaxy S3 should be getting the update in May, alongside the Galaxy Note 3 Neo.

Then in June both the 3G and 4G versions of the Samsung Galaxy S4 Mini should be getting the update, as well as the Galaxy Grand 2, Galaxy Mega 5.8 and Galaxy Mega 6.3.

However there's bad news in store for owners of standard Galaxy S3 (model number GT-I9300), as it seems that Samsung is having problems getting the update to work with TouchWiz applications on the ageing handset. As a result it's listed as 'Cancelled for now'.

As expected the OS update was pushed out to Samsung's latest flagships first - with the Samsung Galaxy S5 launching with the software embedded.

Both the Samsung Galaxy Note 3 and Samsung Galaxy S4 are currently receiving the updates in Poland and South Korea, while the Note 3 is also now available on AT&T in the US, while Galaxy S4 users on Sprint should now be getting the update, with other territories currently being prepped to receive KitKat. With any luck it shouldn't be too long until the update is passed over to the rest of the globe.