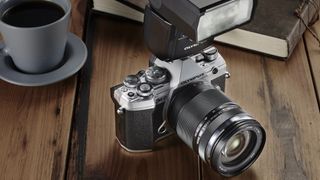 We knew it was coming: back in August, Olympus executives confirmed that the camera company was working on refreshing the ageing OM-D E-M5 Mark II – they just didn't reveal when.

It's also smaller and lighter than the previous models, which are already rather compact. Olympus has managed to achieve this by shrinking some of the key components, particularly the image stabilizer.

Despite that, the new camera is capable of reducing shake by up to 5.5 stops by itself (much like the E-M1 Mark II). When used with a compatible stabilized lens, that would take it up a notch to an excellent 6.5 stops. That's half a stop better than the E-M5 Mark II.

Even the battery has been swapped for the more compact BLS-50 (used in the E-M10 range), which still offers the same battery life as the previously used BLS-1, which was CIPA-rated for 310 shots.

The E-M5 Mark III gets a deeper grip, both in the front and on the back for the thumb, and still manages to be about 55g lighter than the Mark II model. It's also got better weather sealing, and gets a new electronic viewfinder (EVF).

The EVF on the Mark II offered a decent 0.74x magnification, but was an LCD panel. The viewfinder on the Mark III is smaller, offering a magnification of just 0.68x, but boasts a 2.36 million-dot OLED panel that promises a better view of the scene.

Peeking under the hood

This is where the lines between the new camera and the E-M1 Mark II blur a little, with both cameras sharing the same 20.1MP Micro Four Thirds sensor and the same 121-point phase-detect autofocus system (as opposed to the 81-point AF in the 16MP E-M5 Mark II).

That AF system might not seem like much, with the likes of the three-year-old Sony Alpha 6500 offering a much more impressive 425 phase-detection and 169 contrast-detection points. However, the Micro Four Thirds sensor is much smaller than Sony's APS-C crop sensor and offers great depth of field irrespective of the aperture size, thus allowing MFT cameras to find focus quickly and accurately.

There are a host of other improvements in the E-M5 Mark III over the previous models, including a High Resolution Shooting mode that can capture 50MP images (compared to 40MP from the Mark II). And where the older snapper was capable of Full HD 1080p video, there's now 4K recording at both 30fps and 24fps.

The new camera can shoot bursts at 10fps with continuous autofocus, or can reach up to 30fps with focus and exposure locked at the first shot. It also gains additional Art Filters, an anti-flicker mode for when you're shooting indoors, and Bluetooth connectivity.