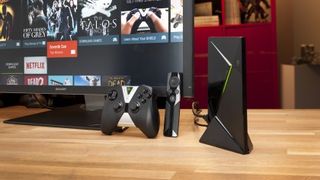 Nvidia is bringing the Shield to China and it’s teaming up with Nintendo to make it a platform for Wii and GameCube games in the country.

The announcement was made by Niko Partners analyst, Daniel Ahmad, who tweeted that the Shield would have a focus on games in China, and will be capable of running popular PC and Nintendo titles.

Already, Nvidia has confirmed that The New Super Mario Bros Wii and The Legend of Zelda: Twilight Princess are available to play on the Shield in remastered 1080p with other titles such as Super Mario Galaxy planned for the future.

Nvidia Shield is coming to Mainland China. Will be priced at RMB 1499.The Shield will focus on games in China. It will run popular PC games as well as Nintendo Wii games such as Mario Galaxy, Twilight Princess and Punch out. pic.twitter.com/gJlZrclps4December 5, 2017

This is gameplay of New Super Mario Bros Wii running at 1080p on Nvidia Shield. It is said that Metroid Prime for Wii will also come to the system in the future. pic.twitter.com/FKYFFoPB2RDecember 5, 2017

It’s unlikely that the partnership will ever expand beyond China as it’s simply a fast and low risk way for Nintendo to enter the Chinese market and give its games a foothold.

Given that the Shield runs on the same Tegra chip as the Nintendo Switch, it’ll be interesting to see whether Nintendo eventually allows recent Switch games to be emulated on the Shield in China if these older emulations prove to be popular.

If it did, it’s even more certain that the ports would never expand beyond the localized Chinese Shield store. Because of the similar components between the Switch an the Shield this does, however, give further precedent for a virtual console on the Switch that will play these older games.