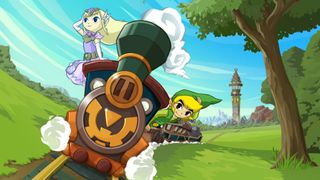 As we reported in May, 2017, Nintendo has been aiming to bring Legend of Zelda to the mobile gaming sphere, and we even had some delightful speculation as to what that could mean.

Some further evidence of a potential Zelda mobile title – as well as a Donkey Kong game – has surfaced via Destructoid in the form of a pair of trademark filings. Specifically, Japanese Nintendo has trademarked the phrases “Spirit Tracks” and “Mario vs Donkey Kong”.

While trademark filings aren’t hard evidence of an impending mobile release, they were filed under the category of “program for home video game machine, downloadable video game program, and program for smartphones”, which bodes well.

We have seen some console games in recent years launch with companion apps for mobile, so it may be a case of one, or both, of these titles landing in some way on the Nintendo Switch or 3DS systems and receiving such an app.

In fact, it could result in any combination of releases on Nintendo’s current systems, as the category in which it’s filed under is broad enough to avoid specifics, but here’s to hoping we’ll get some more mobile action from Nintendo.

Spirit Tracks was a Legend of Zelda title that released on the Nintendo DS and heavily relied on the use of its stylus as an input device – re-arranging puzzles, wielding special weapons, and so on – all of which could be mechanics that translate well to the touchscreen interface of a smartphone.

Similarly, the Mario vs Donkey Kong series largely revolves around puzzles and platforming and could well be remade for mobile. While this would be the mobile debut for Donkey Kong, Mario has already made quite the splash with Super Mario Run.