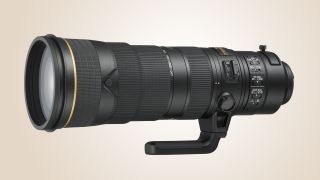 While some had hoped we might see a D5S at CES, Nikon has taken the wraps of a new professional level FX-format lens - the AF-S 180-400mm f/4E TC1.4 FL ED VR super-telephoto zoom lens.

Decreasing the maximum aperture from f/4 to f/5.6, the teleconverter is engaged at the flick of a switch, and Nikon reckons it can be easily operated with a single finger while looking through the viewfinder.

The lens has been designed to appeal to photographers shooting sports and wildlife, promising to deliver astounding speed and clarity.

The new lens features an electromagnetic diaphragm, which has been designed to help create smooth and consistent exposures while shooting high-speed bursts of images.

For Nikon D500, D850 and D5 users who have the luxury of Nikon’s advanced 153-point AF system, the outer row of AF points are activated as cross-type sensors to significantly enhance the AF coverage throughout the frame.

The AF-S 180-400mm f/4E TC1.4 FL ED VR uses a fluorite element, which should deliver improved balance while at the same time minimizing weight. The lens also features a new ball-bearing tripod collar ring that is designed to create a seamless transition from shooting horizontal to vertical composition.

The VR (Vibration Reduction) anti-shake mechanism offers a normal and sports mode, with up to four stops of compensation to help create sharp images.

As you'd expect for a lens of this calibre, the construction includes the use of durable magnesium alloy, while the lens is also sealed against dust and moisture. A fluorine coating is also used to help repel water droplets and dirt.