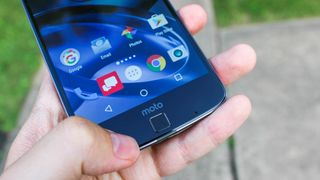 The Moto Z2 is rumored to release this year and the latest leak seems to show off what it will look like: almost just like the Moto Z, that’s what.

Although the leak claims to show off the Moto Z2 Force, the new flagship boasts many familiar design features found in last year’s MotoMod-supporting smartphone. It has rounded edges, an insanely thin build. Even the camera bump and the buttons along the side look to be reminiscent of 2016’s Moto Z.

Of course, also coming along for another ride is the MotoMod connectors near the back’s bottom, which allow for a wide variety of accessories to be easily attached without disrupting the phone’s form factor. The fingerprint sensor is located on the front, but looks to take inspiration from the Moto G5’s concave design - a good move.

There must be something different...

While the leaked image shares a lot in common with the Moto Z available today, there is one difference that could mean something big for the next iteration. The camera bump appears to contain a dual-camera system.

Okay, you don’t have to be super observant to notice that, but what could it mean? Certainly, Moto may have some sort of feature up its sleeve to rival the portrait mode found in the iPhone 7 Plus. But my mind immediately jumps to Tango, the augmented reality system found in the Lenovo Phab 2 Pro and the Asus ZenFone AR.

Moto stated months ago that a Tango module would likely be added to the growing library of mods, but there has only been silence since. If the Moto Z2 contains two cameras and the powerful Snapdragon 835, as it’s rumored to, what’s the point of a Tango mod? There isn’t one, as far as I’m concerned.

As the leaks continue to pour, the Moto Z2 is becoming all the more appealing, especially given the stellar presentation at MWC 2017 of MotoMods set to release in 2017. However, we’ll have to wait to hear from Moto for the formal announcement, so stay tuned.