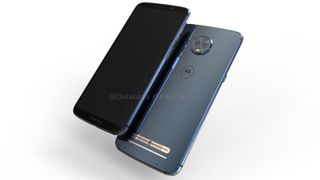 Early CAD renders based on factory specifications show the Moto Z3 Play with an 18:9 screen and the Moto emblem on the back. What’s new is, that there isn’t any 3.5mm headphone jack. The render doesn’t show any cutout for the port along the top or the bottom of the device.

They’ve already removed the 3.5mm headphone ports for the Moto Z series, seems like they’re following suit with the Z Play variants. The headphone jack has been slowly disappearing since 2016. Some exits include the Google Pixel line-up, HTC U11 and the Xiaomi Mi 6 variants. Most recently, at the Mobile World Congress (MWC) 2018, only around half of the flagship phone retained their headphone jack.

Discovered by OnLeaks and KillerFeatures, the renders of the new Moto smartphone show a dual rear camera and the magnetic connectors for Moto Mods along the bottom. The cameras are rumored to have a primary 12MP sensor and a secondary 8MP sensor.

There also seems to be a side-mounted fingerprint sensor instead of the usual home button on the right side along with the volume buttons. The power button remains on the left.

So far the rumors say that the Moto Z3 Play will run on the Snapdragon 636 chipset, have up to 6GB RAM and 64GB storage powered by a 3,000mAh battery.