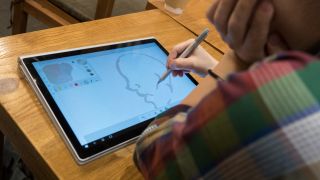 Surface Book and Surface Pro 4 owners will be interested to learn that another round of updates has been pushed out for these devices, at least for those running the preview of Windows 10.

The updates include some attention for the Surface Pen – specifically a "driver update for Surface Pen pairing". Swifter Bluetooth pairing will certainly be a boon, and there's also been some tweaking for the touchscreen, so both touch and stylus operation should be improved.

Or should be improved further, we should say, as firmware updates from earlier this month also addressed the performance of the stylus, and the responsiveness of the touchscreen, making some considerable impact according to some users.

Win Beta found out about these driver updates from a source who is apparently on the Fast Ring of the Windows Insider program, which receives updates and new preview builds first.

If you're also on the Fast Ring, you might want to have a look for the updates by heading to Settings – in the Windows Start menu – then click Update & Security, Windows Update, and then select Check for Updates.

Meanwhile, those who aren't Insiders can expect these tweaks to come through the pipeline soon enough – presumably to prepare the ground for the Anniversary Update, which lands next week (August 2).