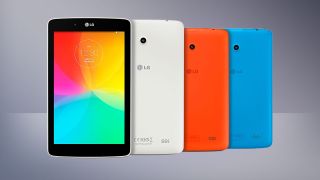 The trio of G Pads we heard about last month are about to touch down in a shop near you. LG has announced that the G Pad 7.0 will be launching in Europe this week, with the G Pad 8.0 and G Pad 10.1 following over the next several weeks.

LG seems to be trying to cater to every corner of the market in one fell swoop here, with the G Pad 7.0 providing optimum mobility, the G Pad 10.1 delivering an media-focussed experience and the G Pad 8.0 slotting in the middle.

All three slates have 1.2GHz quad-core processors, 1GB of RAM and 1280 x 800 True IPS HD displays, along with microSD slots and 1.3MP front facing cameras. There are some differences in specs though.

All three slates include KnockCode and Smart Keyboard, just like the LG G3, as well as coming with QPair 2.0, which makes it easy to pair the devices with Android smartphones and receive alerts on them.

There's no word on price yet, but these are mid-range devices so with any luck they won't break the bank.