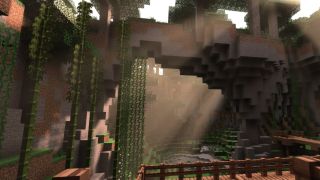 Nvidia announced at Gamecom 2019 that Minecraft will be getting support for a form of ray tracing known as path tracing for the Windows 10 version.

This is a big win for ray tracing (and Nvidia, which is pushing the tech in its RTX 20 series of graphics cards), as Minecraft remains one of the most popular games in the world.

The free update will bring more realistic shadows, lighting and colors to Minecraft.

Of course, Minecraft isn’t the most graphically-impressive game out there – in fact, its simplistic retro graphics are part of its charms – so many people may be wondering why Minecraft is getting the feature.

It could be because the Super Duper Graphics Pack, which was supposed to drastically update the graphics for Minecraft, has been cancelled – with Microsoft claiming that it was “too technically demanding to implement as planned”.

Ray tracing support might have been part of that, and even with the Super Duper Graphics Pack being cancelled, we could imagine that companies with a vested interest in ray tracing (Nvidia) would want to make sure that feature did come out.

It could also be a way of softening the blow of the Super Duper Graphics Pack’s cancellation. Nvidia has released several interactive images that show the difference that ray tracing makes to Minecraft, and despite the limited graphics of the game, the effects are still impressive.

A new trailer has also been released, which you can view below.

Matt Wuebbling, head of GeForce marketing, said that “Minecraft will expose ray tracing to millions of gamers of all ages and backgrounds that may not play more hardcore video games,” and that “the world’s best-selling video game adding ray tracing on PC illustrates the momentum that ray tracing has built.”

Nvidia also announced a range of games – both already released and upcoming – that will feature ray tracing. These include Synched: Off-Planet which will use ray-traced reflections and shadows, Call of Duty: Modern Warfare remake, which comes with ray-traced shadows and new downloadable content for Metro Exodus called The Two Colonels.

The upcoming Watch Dogs: Legion will also get ray-traced reflections, and Dying Light 2 will get real-time ray tracing.

The fact that many upcoming games are only using ray tracing in certain aspects of the game (such as shadows or reflections) hints at how intensive ray tracing is to implement – another reason why Minecraft might have been selected to show off the possibilities.