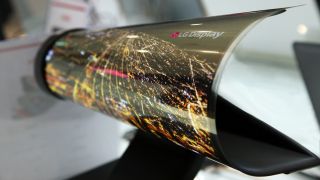 LG has confirmed its interest in flexible phones, and dropped a huge hint that it’ll be getting into that market, but believes that the time isn’t right now.

The statement came from Kyle Yoon, senior product manager for LG Mobile, during a briefing asking why the brand hasn’t launched a competitor to the Samsung Galaxy Fold and the Huawei Mate X:

“When it comes to foldable, [the day will come] when we’ll all have a foldable device. That’s only if the Play Store has [apps in] a native resolution in those ratios, if the price of foldables will come down - we want to deliver a device more people can use that’s affordable and [offers] more content with 5G. We’re focused on that first but foldables… yes, we will have those devices.”

LG has curiously decided that instead of just staying out of the big-screen market altogether, it’s choosing to release an add-on instead: the LG DualScreen.

This clips onto the LG V50 and provides a second 6.2-inch display that flips out to increase the real estate available for the user - but it’s a long way from the widescreen fold-out phones that Huawei and Samsung have made, with thick bezels in between.

It makes sense that LG wouldn’t want to jump feet-first into the flexible smartphone market, as it’s mobile arm has posted losses for a number of quarters now.

LG Electronics’ president and head of mobile, Kwon Bong-seok, said recently that the brand wouldn’t be doing anything dramatic as it looks to re-establish itself in the smartphone market - but also reiterated that LG was ready to go with a flexible phone when the opportunity was right.

It’s an interesting move from LG - we’ve seen two brands announce commercially-available products this year, and a host of other companies (such as Xiaomi and Alcatel) have shown off concept devices, so if LG has something to prove its technological prowess in this area, why not go for it?

It feels like the DualScreen is an attempt to offer the market something, which makes something that’s just. fine as an accessory feel almost like an apologetic move now so many brands are talking about a glossy, flexible future.

It would be good to see LG pushing back to the sharp end of the smartphone market, as it’s a company with some genuine innovation and technological prowess inside - and the more players competing for consumer dollars will just lead to better phones.

Will LG offer a flexible smartphone by the end of 2019? It could very well depend on the performance of Samsung and Huawei’s efforts, which will go on sale in the coming months.

MWC (Mobile World Congress) is the world's largest showcase for the mobile industry, stuffed full of the newest phones, tablets, wearables and more. TechRadar is reporting live from Barcelona all week to bring you the very latest from the show floor. Head to our dedicated MWC 2019 hub to see all the new releases, along with TechRadar's world-class analysis and buying advice about your next phone.