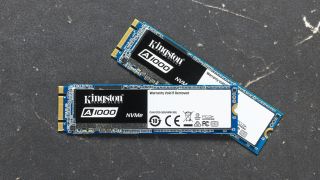 Kingston has announced its first entry-level M.2 NVMe solid-state drives, which promise twice the performance of a SATA drive while being just as affordable.

Based upon 3D NAND technology, the new Kingston A1000 supports sequential read and write speeds of up to 1,500MB/s and 1,000MB/s, respectively. Additionally, these SSDs will come in 240GB, 480GB and 960GB capacities, with the largest drives offering the fastest data transfer speeds.

Although Kingston’s new entry-level PCIe NVMe SSD offers a 4-channel Phison 5008 controller and 3D NAND Flash to help it push it to double (or even triple) the speeds of a traditional SATA solid state hard drive, it’s ultimately held back by a Gen 3.0 x2 interface that can only serve up half the bandwidth of higher-end units.

So far it seems like a better slightly better bargain than the Samsung 860 Evo, but the Adata XPG Gamix S11 announced just yesterday might be an even better deal.