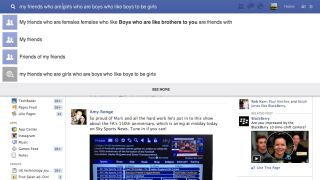 Facebook reached another mobile milestone today, declaring it has made more money from ads on its phone and tablet apps than its desktop site, and that's spurring new mobile features.

"We're really early in the game on this," he said referring to the desktop-only graph search.

"You can see that because we haven't even really rolled out our mobile version of graph search yet and we're a mobile company.

"Pretty soon, you should expect us to roll out the mobile version of this. I think that's going to be an important step because most of the usage of Facebook overall is on mobile."

However, the changes are likely limited to English-speaking countries, as Graph Search has only recently exited beta in the US and begun to roll out in the UK.

"It's only in English so far, and we have to internationalize it," noted Zuckerberg. "There's a long roadmap of things we need to do. But it's going to be incredibly useful when it's ready."

He sees Graph Search's wider roll out as a three to five year investment rather than a more typical one or two year project.

At issue are the trillions of pieces of content that people have shared on Facebook. Ranking it all is going to be a multi-year effort.

"As a number of people on the team who have worked on web search engines in the past have told me, a trillion pieces of content is more than the index in any web search engine," he boasted.

Facebook didn't have any more information on its loss among teens as daily active users, saying "it doesn't have any new data to report today."

"One of the things that we want to try to do over the next few years is build a handful of great new experiences that are separate from Facebook today that [give] people new ways to share."

"You can see it from our own offering, not just from Facebook but also Instagram and Messenger already today. We're going to keep on working on this over the next few years."