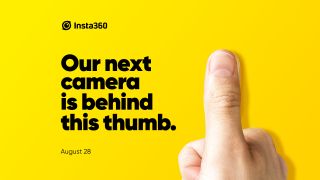 360-degree camera specialist Insta360 has teased an upcoming addition to its camera line, one that promises better stabilization than a standard action camera in a body that hardly weighs a thing.

While it's not giving too much away, the company has announced a reveal date of August 28, and claims the new model is six times lighter than an action camera –exactly which action camera it's referring to there is unclear, although the promo video features what appears to be a GoPro Hero7 Black or older Hero6 Black with the branding rubbed away.

Insta360 has good reasons to be vague here – you can win one of three samples of the new mystery arrival by correctly guessing its weight on the company's website. Just for reference, the most recent (non-Session) GoPro Hero models have weighed anything from 92.4g through to 118g, which should mean this model weighs next to nothing.

The company also reckons its new camera's image stabilization system is "twice as smooth" as that from an action cam – again no camera is specified, but we'd assume it's a GoPro. Given that we're were very impressed with the HyperSmooth image stabilization system inside the GoPro Hero7 Black, and still satisfied with the previous system inside the Hero6 Black before it, that's quite some claim.

Then again, Insta360 did wow us with the 5.7K charms and silky FlowState image stabilization technology in its last big reveal, the Insta360 One X, which surfaced almost a year ago. Whether or not the new model features this same technology – or indeed, is even a 360-degree camera – is unclear, but it does at least give the company's fighting talk a little more substance.

Naturally the competition has some small print, so make sure to give that a read before you enter. And if you end up winning one because of what you've just read, you know it would be only polite to send it our way for a play, right?