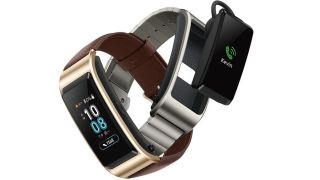 Little is known so far about the Huawei Watch 3 or what other fitness trackers the company will bring out this year, but in the last seven days we've heard of two separate Huawei rumors that relate to both wristwear and things that plug into your ears.

On Monday this week, we saw a patent that showed how the company is attempting to work out how to include a pair of Bluetooth earbuds within an upcoming Huawei smartwatch.

The patent suggests it would probably involve a little capsule that sits between the strap and the watch body on either side of the device. The earbuds would then slot into this section of the watch.

An alternate design shows the earbuds held in a container on the underside of the watch strap, but whichever design Huawei went with it's clear from the diagrams below that one of the biggest problems the company will face is including them without making the watch unwieldy.

Then later in the week, we saw often-correct Twitter leaker Evan Blass posting an image of the Huawei TalkBand B5, which based on the date on its display may be launching on Monday, 9 July.

We've seen three TalkBand devices from Huawei already - the company seems to have skipped straight to 'B5' as the number four is unlucky in China - and they've been some of the oddest wearables on the market.

It's essentially a fitness tracker that at first looks to have a similar design to other products in the space - it even looks similar to the Huawei Band 2 Pro when on your wrist.

If you push the main body of the tracker, it then pops out of the casing and reveals a Bluetooth headset.

When you've done that, it'll stay connected to your phone through Bluetooth and you can use it to make phone calls without using your hands, like an earpiece from the early noughties.

It looks like the TalkBand B5 will do exactly the same as the last few generations - the first image we've seen of the device at the top of this page shows that it will look very similar to the TalkBand B3.

There are sure to be improvements of some sort, but this is clearly a quirk of Huawei where it thinks the combination of Bluetooth headsets and headphones with wearable devices work well together.

There's nothing else on the market like the TalkBand, but it's clear the company has seen some sort of success with its odd product as it has made four generations of it in as many years.

From wrist to ear

As for the Huawei Watch patent with integrated Bluetooth headphones, this may just be an unusual idea that the company had at one stage and will never actually be on sale.

The vast majority of patent applications from large companies never end up being released as products, with the often strange and innovative ideas that come to light through them remaining as just that - ideas.

This is all within a normal sized Apple Watch band. It's a thought-provoking idea, but it's likely to be an idea that never makes it to market as it is so different to anything else on sale.

It's clear some part of Huawei is interested in combining audio with fitness trackers and smartwatches, but it's an odd space to inhabit when no other large manufacturers seem anywhere near as interested.

Perhaps the closest thing to it is the Sony Xperia Ear Duo hearable, but that's purely headphones and doesn't include any specific fitness features.

Expect to hear more about the Huawei TalkBand B5 in the coming weeks, but we don't think you'll be able to take your headphones out of any smartwatch's strap for quite some time yet.