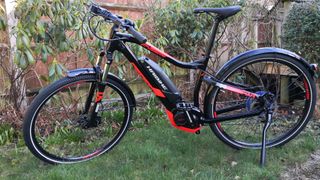 Unlike conventional cycles where all the power comes from the rider, e-bikes get an extra boost from electric motor. This is generally a standalone unit built into the frame of the bike and it’s an area that has been dominated by Shimano and Bosch.

The great thing about these self-contained motor units is that they can be designed and engineered as bolt-on or bolt-in components.

That means a whole variety of bike makers can subsequently design their bikes around them and they can be placed in situ during assembly. It’s a simple but effective formula.

E-bikes are pretty common now too, so it’s easy to find a dealership to take a look at one should you run into any problems along the way. Using a power wash to get off dirt and grime is one example of a no no that could render your power unit dead on arrival.

Less common, at least in the UK and Europe are motor units from Yamaha, although that’s not to say they are any less effective. Indeed, German manufacturer Haibike knows a thing or two about putting together a decent bicycle having been building them under that brand name since the mid 90s, but with cycling roots that go back much farther.

So if it’s good enough for them then opting for Yamaha electric assistance over Shimano or Bosch should be all fine and dandy, right?

This new model, the Haibike SDURO Hardnine 2.5 Street is billed as a ‘sporty hardtail e-mountain bike’ by the manufacturer. It's a nice bit of kit, but the 'mountain bike' bit is a misnomer because this is more of a street bike with a hint of off-road capability. Think gravel tracks and grassy trails rather than mud, especially with the less-than-knobbly tyres.

It’s not a bona fide headturner like the awesome Shimano-powered Merida we looked at a while ago during our e-bike overview either. Nope, the Haibike is pretty low-key – understated, even – but if you’re planning on using it around town where bikes get pinched on a daily basis then that’s no bad thing.

At its core is, of course, the e-bike bit of the equation. The SDURO Hardnine 2.5 Street benefits from a Yamaha PW-SE motor, which is paired with a 400Wh Yamaha Lithium Ion battery. The bike comes with a Yamaha 4A quick charger too.

Information relating to the power unit, what you’re doing with it and how much longer you’ve got left in the battery is on show up on the handlebars via a Yamaha display. Plenty of continuity in the electronics department then.

The rest of the bike ticks plenty of boxes in terms of day-to-day usability. We particularly liked the front and back wraparound mudguards, which obviously saves your clothes from the worst that the wheels can flick up from the road. Having a muddy wet streak up your back is always the downside of a mudguard-free two-wheeler.

The Tektro M275 disc brakes, both front and rear work to great effect thanks to their 180mm two-piston design. There’s suspension on the front forks only though, with steel springs offering the ability to soak up divots, potholes, steps and kerbs to reasonable effect. At the back though it’s just the air in your tyres and your leg muscles that absorb the shocks. A skid plate, incidentally, protects the motor from knocks.

The frame itself is a good all-rounder, with a low-slung design and crossbar that curves up from beneath the saddle towards the handlebar stem. In that respect the SDURO Hardnine 2.5 Street is easy to get on and ride. In fact, it feels rather like a unisex bike that can be ridden by anyone. There are models available for both sexes however.

The 29-inch wheels feel just right too, especially if you’re pootling around town, but out on a run and with assistance from the battery and motor combo it feels pretty zippy, with a maximum torque of 70Nm on tap.

We took the bike for several spins over the course of a couple of weeks and it’s good news if you were wondering about the ability of the Yamaha powertrain. Haibike has added the PW-SE motor units to all of their Yamaha models for this year and they reckon there’s improved response to higher cadence and better all-round performance thanks to that higher torque output. Out on the street, gravel paths and occasionally the fields, we found the bike perky enough and battery life seemed solid too.

Riding is a breeze, with four modes to choose from if you’re using the electric motor: Eco Plus, Eco, Standard and High. These, along with the walk assist option, can be called up using remote control via the left-hand grip. The LCD screen keeps you posted on what’s happening, displaying the likes of current speed, battery level and remaining range, plus frequency, mileage and time.

In other words, it’s more than adequate. There’s no need to worry about being home by dark either, because the SDURO Hardnine 2.5 Street comes with front and rear lights.