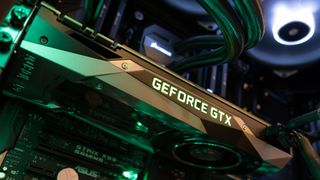 We’ve seen the prices of graphics cards head back to normal levels in recent times, thanks to waning cryptocurrency demand, and this is a trend that’s set to continue according to the latest from the GPU grapevine – with price tags set to drop by around a fifth this month.

That’s the skinny from DigiTimes, which has its ear to the ground in the graphics card supply chain, and cites sources who point to a ‘cryptocurrency mining chill’ weakening demand for GPUs to be used in mining, with video cards expected to see a resulting average drop of about 20% as July progresses.

On the face of it, that’s great news for gamers looking to get themselves an upgraded GPU (or those building a new rig), but we must insert the usual rumor-related caveats, as DigiTimes isn’t always the most reliable source.

However, talk of dropping prices as manufacturers try to clear their inventory of GPUs certainly makes sense given what we’ve previously heard about Nvidia, which apparently overestimated the demand from cryptocurrency miners, and has produced and shipped an excess stock of current-gen cards as a result.

Other speculation has pointed to the fact that this is why we are seeing a delay in the introduction of Nvidia’s next-gen cards, because stock has to be cleared down before these are launched for obvious reasons – demand for the likes of the GTX 1080 would seriously fall off if its successor suddenly appeared on the scene.

The DigiTimes report also underlines this, observing that globally, the GPU market currently has an inventory of around several million units (and furthermore, Nvidia has something like a million next-gen GPUs waiting in the wings to be released).

Further pressure will likely be exerted by cryptocurrency miners who are giving up on their hobby, and selling off their many video cards on the likes of eBay while they’re still worth a good amount of cash (with a potential rush to do that ahead of falling prices).

DigiTimes also notes that ASIC sales – dedicated mining rigs that the serious miners use rather than simple PCs with multiple graphics cards – are also slumping, unsurprisingly.