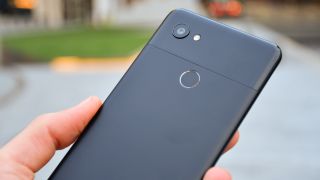 Most Google Pixel 3 XL leaks so far have pointed towards a single sensor camera on the back. Now, a case appearing to be for the Pixel 3 XL adds further credence to the rumor that there will still be just one rear camera, as spotted in an image by PhoneArena.

The leaked images show the front and back of a simple lavender case. The front view shows a purported Pixel 3 XL inside.

That side lines up with rumors that the Pixel 3 XL will have a notch at the top and dual front-facing cameras. The rear of the leaked image shows cutouts for a fingerprint scanner in the usual spot for a Pixel as well as cutouts for a single camera sensor and a flash.

No second sensor, no sweat

While it seems like just about every smartphone maker is embracing the dual-sensor setup for rear cameras, at least for the larger versions of flagships like the Galaxy S9 Plus and iPhone 8 Plus, it may seem a bit strange that Google is still holding out.

Of course, with a little reflection, there should be little to fear from Google sticking with a single sensor for the Pixel 3 XL. Last year's Pixel 2 XL only had a single rear camera sensor, and when it launched, it was rated the best smartphone camera on the market by DxOMark, stumping even Apple's and Samsung's best dual-sensor setups.

If Google keeps up with past trends, its new camera on the upcoming Pixel 3 and Pixel 3 XL will once again leap to the front of the pack, and it'll do so one sensor at a time.