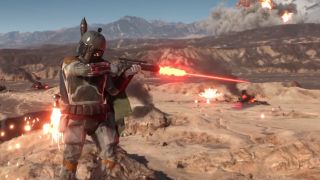 With The Force Awakens' imminent arrival sending everyone Star Wars mad, it almost goes without saying that EA plans to follow up Star Wars: Battlefront with another expedition to a galaxy far far away.

Speaking at the UBS Global Tech Conference today, EA CFO Blake Jorgensen revealed that EA has grand plans to make the most of its licensing agreement with Disney, including but not limited to Battlefront sequels.

"It's a big effort for us, and I don't think there's a human being in the world who hasn't heard of the Star Wars movie coming," he said, speaking to Gamespot.

"We struck a licensing deal with Disney a few years back that's almost ten years in length. The game that comes out tomorrow, Star Wars Battlefront, is a traditional first-person style shooter game. Our goal is to make future Battlefront games as well as other style games around the Star Wars franchise, both on mobile as well as console and PC. It's a huge opportunity for us."

Star Wars fans can also expect to soon see mobile games rolling out – beware in-app purchases, that way lies the dark side – as well as a third-person title in the vein of Uncharted from former Naughty Dog writer Amy Hennig and EA's Visceral Games.

Maybe EA could follow that up with a brilliant Indiana Jones game. After all, Nathan Drake's just an Indy wannabe without the cool hat and Nazi-killing cred.

Star Wars: Battlefront releases later this week, and will put players in the boots of characters like Luke Skywalker and Darth Vader, as well as giving them the chance to pilot iconic ships like the Millennium Falcon, X-wings, and TIE fighters.