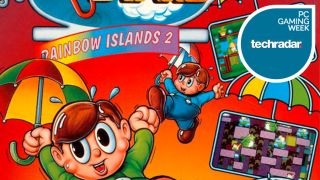 Parasol Stars was the follow-up to the well-received Amiga platformer Rainbow Islands. in 1992, the big debate for Amiga Power was whether this follow-up should be reviewed in the shadow of that game. As it turns out, Ocean's follow-up was longer, better and far more satisfying, garnering high review scores across the board.

It's here at last! Man the barricades, batten down the hatches, splice the mainbrace, no-one here gets out alive! Time for some (serious) reviewing…

Parasol Stars is the third game in the Bubble Bobble series, having been preceded by Bubble Bobble (obviously) and Rainbow Islands, the current Amiga Power choice as Best Amiga Game of All-Time. And that's all the background you're getting, 'cos quite frankly all three games have such silly, dodgily-translated Japanese storylines it would be a total waste of space to go into them here. Instead, let's get right to the nitty gritty – is this game better than Rainbow Islands or what?

No. There you go, pretty revolutionary concept, huh? Now some of you may be thinking 'He's thrown away his best card dangerously early in the review there Brian, this is a review of 1200 words and it's going to need 110 per cent effort if he's going to keep the crowd interested to the end', but the point to note here is, despite what everyone in the world (including us) might have said, it doesn't really matter two hoots how this compares to Rainbow Islands.

Well, it does a bit, if only for the sake of argument, but the most important thing by far is – and forgive me if I'm stating the obvious here – how good a game it is in its own right. The best pedigree in the world means nothing if it's just used to sell a mediocre cash-in (Gauntlet 3), just like the worst background imaginable can still produce an all-time classics (The Blues Brothers).

So forget about the history. Forget about Rainbow Islands. Forget about Bubble Bobble. Forget the hype. Forget your own name if you like, but let's take a cold, hard look at Parasol Stars – the game.

Oh no! It's hypocrisy alert!

Okay, so I know I just said 'forget about Bubble Bobble', but the unavoidable first thing that strikes you when you start to play Parasol Stars is just how like its illustrious parent it is. Single screens (for the most part, a few levels scroll horizontally a little bit), masses of baddies in set formations, and often loads of bubbles floating around containing weapons lifted directly from the original game. The nasties' movements are noticeably similar too, floaty, bouncy, jumpy kinds of stuff, and they even share the same property of getting 'angry' if you half-kill them and then allow them to recover before you finish the job off.

Gameplay-wise you've got the same objective, just kill everything on each level and move onto the next one, making judicious use of Bubble Bobble-type power-ups and bonuses which appear seemingly (but almost certainly not, as any Rainbow Islands devotee will tell you) at random around the screen.

Perhaps a good comparison to make at this point would be with Switchblade and Switchblade II – in that case too, a simple arcade game was followed by a sequel which upped the style quotient by several hundred percent and refined the design almost to perfection without really changing it a significant amount. (And, the original Switchblade was overrated too, but let's not get into that…)

Step back in time, Dr Wells

In many ways, then, Parasol Stars is a step backwards (at least in design terms). But then, as we were discussing earlier, so what? It is still, it can't be denied, an excellent game. I personally didn't care for Bubble Bobble as a one-player game at all, but this is immensely playable in solo mode, with the same ease and instinctiveness of control that was one of Rainbow Islands' strongest points.

Not that the two-player version isn't great, though – in fact, it's one of the best I've ever seen. The interaction between the characters is inspired, and adds a whole new dimension to the game, whether the two players are battling it out (stealing bonuses, hitting each other with weapons or even picking each other up and using the other character as ammunition to throw at the baddies) or cooperating to even the odds by sharing power-ups, saving your brother from baddies or even using your parasol as a platform to give the other player a boost to an otherwise unreachable bonus or area of screen.

The critical difference between this and Bubble Bobble, though, is that you don't feel as if you're missing out on half the fun if you're playing Parasol Stars by yourself.

So after that neat ideological backflip, what are we left with? A great game? Certainly. A worthy sequel? Undoubtedly. An earth-moving, life-altering, boundary-shattering, transcendental game experience? Afraid not.

Parasol Stars is a fab little arcade game, and that's as far as it goes. You might argue that that's all you could ever expect it to be, and maybe you'd be right, but in the last year I've played a lot of games that have moved me more than this one, and perhaps I've given the real reason away by calling it 'little'. Of all the things I'd have expected from Parasol Stars, a feeling of 'bigness' was probably the most important one, and it doesn't really have it.

Please don't get me wrong, I like this game a hell of a lot, but at the end of the day it has to go down as just the slightest of disappointments.