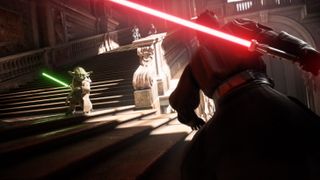 There's a disturbance in the force: a new Star Wars game developed by Respawn Entertainment that goes by the name Jedi Fallen Order.

The game was announced during EA's keynote at E3 2018 and while details are scarce, the Respawn Entertainment's Vince Zampella says you can expect the new game to be "dark, very dark".

What Zampella did tell us is that the game will be set in between Episodes III and IV when the Jedis were being hunted down to extinction.

Which side are we going to be playing on? We'll just have to wait for additional details before the game releases in Holiday 2019.