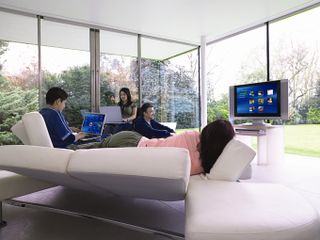 Unlike Intel's Viiv initiative, AMD doesn't see the PC in the living room

AMD showed off its AMD Live technology at IFA in Berlin today.

The core concept isn't new but as Stephen DiFranco, the company's corporate vice-president for global consumer sales guided us around the firm's home away from home, it is clear these guys are seriously pushing it.

The AMD Live system works around a set-top-box mentality, with the PC at the centre of the arrangement. This isn't the same as Intel's Viiv, since unlike Intel, AMD doesn't see the PC as being in the living room itself.

What Viiv hasn't yet done is deliver much more than a sticker. AMD is clearly hoping to steal a march in this regard by showcasing software applications that support the platform. And, moreover, these applications actually seem rather useful.

"We realised early on that we're not that good at software," explained DiFranco. As a result, the company charged Orb Networks with creating some of the programs required for the software side of the offering.

Network Magic is designed to make network connections simple: Media Vault is a Steamload-powered 25GB online backup service for your media; and OnDemand is a tool for delivering entertainment content, something that AMD sees as crucial to its offering.

LogMeIn enables you to get to your PC's stored files from wherever you are, while Compress enables XP Media Center edition users to compress their video files.