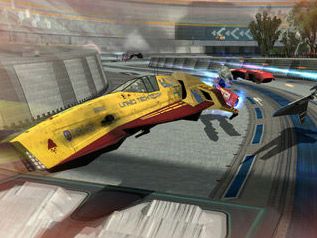 The ads - which can't be skipped - will be shown during the game's loading screens.

Double Fusion promises that the ads will "approach the HD graphics experienced during gameplay". It says that the video commercials have been developed to "contextually match the game's sleek futuristic design" and "complement the WipEout HD world seamlessly." So don't expect to see any 30-second ads for Pampers.

Jonathan Epstein, CEO of Double Fusion, says: "Double Fusion is responding to advertiser demand and pushing in-game ad innovation to a new level. The title is a perfect vehicle to connect advertisers to a captivated audience. It comes as no surprise that advertisers have already signed up for WipEout HD even before the launch of the new video ad units in the game."

A recent survey by games marketeers NeoEdge found (surprise, surprise) that in-game video ads could deliver a 500 per cent increase in brand awareness and increase positive brand perception by over 50 per cent among a 'captivated' audience. The market for in-game ads is predicted to grow to over a billion pound business by 2012.