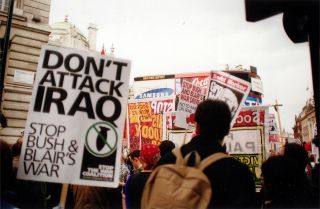 The Active Denial System is "stepping into the Buck Rogers scenario," says Colonel Kirk Hymes, who's in charge of testing the ray gun

The Pentagon tested out its latest toy – a ray gun that harmlessly repels enemies by causing a “burning sensation in the top layer of the skin” – on mock demonstrators this week.

To exhibit the weapon, the military staged a scenario that “soldiers might encounter in Iraq”. This consisted of a handful of military volunteers acting as civilian protesters, who were armed with signs saying ‘peace not war’ and threw objects at a small collection of soldiers, The Raw Story reported.

A few blasts from the Active Denial System later, and the crowd was effectively dispersed. However despite this demonstration of faith, the military reportedly remains unwilling to trust the weapon enough to send it to Iraq, raising suspicions that the real intention is to use it for domestic crowd control.

We’re not so sure – if you saw last week’s million-round-a-minute gun slash robot you’d know the crowd control market is all sewn up...

It was the question of the week for Israeli legislator Zahava Gal-On. She reckons so. She’s proposing mandatory five-year jail sentences for online brothel operators who advertise virtual women for sale.

Rather than cracking down on sites like Craigslist and The Eros Guide, where real sex is advertised for hire, Gal-On is instead opting to log-on to hunt down online brothel owners.

It seems a strange move, given that while a Second Life brothel owner might make around $50k per year in real money by selling virtual sex, Eros Guide reportedly nets around $500,000 annually.

The proposal has also met resistance in the form of the Justice Ministry, who opposes the proposal on the grounds that there is no such thing as a ‘virtual brothel’.

"Legally, the internet is not the place where prostitution takes place," wrote Anat Hulta of the State Attorney's office. "It is merely a means to advertise prostitution and to link between demand and supply." A fairly fundamental distinction, then. We’ll keep you posted.

Google made the headlines earlier this week as well, when it was forced to remove a small town in Minnesota from its Street View feature after inhabitants threatened the search giant with accusations of trespassing.

The Google-van casually ignored the no-trespassing sign welcoming potential visitors to the city, driving straight past to take photos of the privately-owned roads

City officials immediately launched a complaint when images of the private community appeared on the site, demanding they be removed. "This is very rare, where an entire town would request to be taken off," Google spokeswoman Elaine Filadelfo told the Minneapolis Star Tribune, adding that the company had removed the images.

Starbuck’s plan to entice punters into its shops with the promise of free Wi-Fi backfired this week, when interest in the scheme was so high it flooded the site.

Customers looking to take advantage of the Starbuck’s Card Rewards website – where for $5 you get two hours of free Interwibble access per day – instead met with an error message saying the site was down.

It wasn’t the best start for the new program, which was only launched on Tuesday. An embarrassed Starbucks spokesman admitted the problems were the company’s fault – not provider AT&T’s.