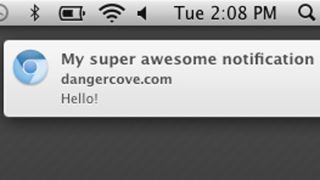 Google Now showing up for Mac

The know-it-all Google Now app could make its way from mobile devices to Macs soon thanks to the implementation of the Chrome OS notification center in the Mac OS X version of Chromium.

"Mac users will be happy to know that rich notifications are being implemented on Mac," said Chromium Evangelist François Beaufort in a Google+ post today.

"It's still under heavy development but you can play with them by running chrome with the --enable-rich-notifications switch (no flag yet)."

The fact that the Google Chrome browser's open-source counterpart includes these notification cards required for Google Now backs up previous hints about it being tested for Apple desktops.

However, as TheNextWeb notes, the Google Now feature isn't part of the Chromium OS X package just yet, and remains very limited on Chrome OS and Windows machines.

While still in experimental stages on computers, Google Now's transition to Macs would be the latest way in which the Mountain View company's software has sunk its teeth into Apple devices.

Google Now launched on iOS last week within the Google Search app for the iPhone and iPad.

With Gmail, YouTube and Chrome all available on iOS devices, Google has become one of the more popular developers within Apple's App Store.