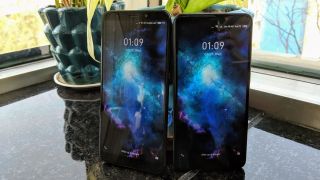 Considering that the Redmi 5 costs Rs 8,999 and the Redmi Note 5 costs Rs 11,999, the price difference should be justified, right? The gap of Rs 3,000 should offer something that’s worth its value.

Maybe the difference in price might even seem unnecessary to some users if they prefer a small phone that’s optimal for single-hand usage as compared to a 5.99-inch screen. Others may say that the since the Snapdragon 625 is a better chipset than the Snapdragon 450, they wouldn’t mind shelling out the extra bit.

We’ve compared all the aspects of the phone below, so that you can see for yourself whether the bargain is worth its bluster.

Both, the Redmi Note 5 and Redmi 5, look more or less similar on the outside. Even the camera, flash and fingerprint sensor placement on the back of the phone is in identical proportions. They’re both build on an aluminium frame with a plastic casing.

The only significant factor that stands out is that the Redmi 5 looks like a smaller counterpart of the Note 5 with dimensions of 151.8 x 72.8 x 7.7 mm. It goes without saying that due to the same reason, the Redmi Note 5 is a little heavier as well.

The Redmi Note 5 does have sharper edges than the Redmi 5. Though it doesn't make a big difference for gaming, or videos, but when making calls and holding the phone to your ear, the grip will matter.  The sharper edges aren't a deal breaker, but a tad inconvenient.

The best part about these phones is that they retain their 3.5mm headphone jack so that you can plug in your favorite pair of headphones without much of a bother.

The one very obvious difference on the phones is that the Redmi 5 has a dull, off-white display where as the Note 5 is more red-tinged. This is probably due to the fact that former has better saturation and contrast than the latter.

Considering that the Redmi 5 runs on the Octa Core Snapdragon 450 and the Redmi Note 5 runs on the Octa Core Snapdragon 625, you’d expect the latter to be faster. In actuality, there really isn’t much of a difference between the two chipsets. In fact, both the SoCs even run on the same 64-bit ARM Cortex A53 CPU. The Redmi Note 5 is capable of clocking up to 2.0GHz and the Note can go as fast as 1.8GHz.

The Snapdragon 450, though being an entry-level chipset, has specs that will support any mid-range device. So it terms of power and how much your phone is capable of, the difference in chipsets isn't the diverging factor... For this particular case, anyway.

The Note 5 does have 4G RAM with 64GB storage while the Redmi 5 has 3GB RAM and 32GB storage. So the differences in efficiency will become more and more apparent as you start running out of space on your phone, which is sooner for the Redmi 5 than the Redmi Note 5.

Even in terms of operating systems (OS), both the phones run on Nougat out-of-the-box with MIUI 9.0 running. According the reports, the MIUI 9.5 update should be rolling out later this month for both the phones.