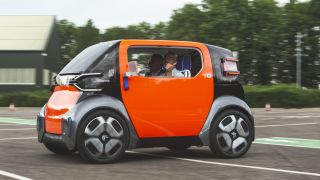 The Ami One Concept is Citroen’s vision for future mobility. It looks like a great idea, but it’s more than just a static vision, it actually works. TechRadar knows this as we got to take it for a spin recently at the Bruntingthorpe Proving Grounds in Leicestershire.

Well, it was actually a sedate drive around some cones in the car park rather than any kind of hair-raising track action, but the experience was perfect for underlining the whole point of the boxy little beauty.

Think short distances, in and around town, and you’ll see precisely where the Ami One Concept is supposed to fit in. It’s a veritable Tardis inside, with room for two generously-sized humans and there’s a small alcove in the front passenger footwell where Citroen folk explained we could keep a dog if we had one. The carmaker had also gone to great lengths on the details, with colour-coded bags and a satchel that illustrated just how much shopping you could pack in.

Of course, being a concept vehicle, the Ami One is a little rough around the edges. We were told not to put full lock on, as the steering tended to foul the tyres on the inner arches. A minor point.

But the cubist design really works. At 2.5 metres long, 1.5 metres wide and 1.5 metres high it’ll fit into pretty much any kind of city parking space. A bit like a Smart car, you can even get two into one traditional parking bay.

Thinking inside the box

Getting into the Ami One is a cinch, thanks to the wide door openings and that deceptively spacious interior. Once you’re seated behind the slightly odd resin-like steering wheel there’s not too much to get your head around. Brake and accelerator pedals in the footwell, and a central-mounted dial that lets you select drive mode. There’s reverse too. Pressing the Start button and turning the dial to Drive we gently applied some pressure to the accelerator pedal and began moving.

Driving gingerly around the car park, the little Ami One performed as expected. The ride is a little harsh as this is still a concept, and naturally the overall feel is a bit unrefined. Which is what you’d expect from something in development. But the overall vibe emanating from the interior of the box car was fun. It really does put a smile on your face.

Better still, despite a couple of drops of rain, we rolled the roof back and let the outdoors connect with the interior space. It’s was, quite literally, a cool place to be.

Ready for the city

After a couple of circuits we noticed a slight smell of burning, but after a quick pit-stop the engineer realized that the parking brake was still partially on. Not the fault of the driver, incidentally. Pulling away again the difference in power was obviously very noticeable.

The Ami One is designed with a top speed in the region of 45kph, which for an around town mobility solution seems more than adequate. Citroen spokespeople noted that this would also be a vehicle that could be driven without a licence, which adds all sort of interesting connotations to the mobility equation.

Although it’s still a concept, Citroen claims that the 100% electric Ami One could be fully charged in a couple of hours. It would also have a 60-mile driving range, and comes armed with its own sound signature. This would be to cover new regulations that mean electric vehicles have to emit some kind of audible alert for pedestrians.

We were also taken by the way you can use your smartphone, which sits in front of the wheel for navigation, while the doors lock and unlock thanks to a QR code on each one.

Also at Bruntingthorpe, inside a very large hangar, was the wild 19_19 concept car. While this is more unlikely to see the light of day compared to the Ami One, the car is a great way to celebrate 100 years of the Citroen brand and underline its commitment to electric mobility, both now and in the future. We took a look around it and also got to sit inside, front and back, where one thing immediately stood out – the comfort.

Citroen has always had a knack for making comfy seats and although this is ‘just’ a concept, it was mighty cozy inside. The carmaker has followed the current theme of creating an almost living room-type space for the interior, with an ambience that seems perfect for sitting back and watching a movie.

And you can do just that as there’s a big screen under the dash so rear-seated passengers can get a full cinematic experience.

Autonomy is at the heart of this funky-looking machine, though there’s a steering wheel that has to be one of the weirdest we’ve ever clutched. Indeed, Citroen really has pushed the boat out with its use of materials, with the faux marble touches (actually resin) and soft but durable-looking seat coverings. Before you get to the interior though, it's the futuristic lines of the exterior that really captivate.

Central to the eye-catching appeal of the design are the wheels, which are big. They're very big, in fact, but quite low-profile and Citroen's designers worked closely with tyre manufacturer Goodyear to get the right effect.

There are other highlights though, with some great views to be had of those nutty curves from any way you look at it. With the eyeline from the rear of the 19_19 a particular highlight for us, we got a strong whiff of an aviation theme going on.

Ultimately, the ride from the 19_19 would, say its designers, be akin to a magic carpet ride thanks to the sumptuous interior and suspension that involves the use of Progressive Hydraulic Cushions.

Will it ever become a ‘thing’? That’s unlikely, but what a great way to celebrate 100 years of Citroen. In the meantime though we’d definitely love to see the little Ami One become a full-on production reality.