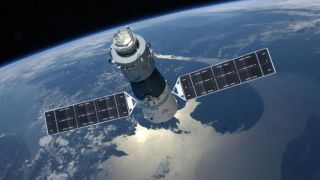 About a year ago, Chinese officials confirmed that they'd lost control of their Tiangong-1 space station, and that it would re-enter the Earth's atmosphere in late 2017.

Well, the time has come. China's equivalent of NASA, the China National Space Administration (CNSA), has notified the United Nations that the 8.5-tonne craft has begun its descent, and will hit the surface some time between October 2017 and April 2018.

Tiangong-1 ,or 'Heavenly Palace', was launched in 2011 and has hosted both unmanned and manned missions. It was visited by China's first woman astronaut, Liu Yang, in 2012.

But following what's believed to have been some kind of technical or mechanical failure in 2016, CNSA announced that the 10.4-metre-long craft had "comprehensively fulfilled its historical mission" and would be coming back to Earth.

So far, that's meant a slow decay in its orbit, but in the last few weeks the craft has dropped to a denser part of the Earth's atmosphere and begun to descend more rapidly. Jonathan McDowell, an astrophysicist from Harvard University, told The Guardian that he expected it to land in late 2017 or early 2018.

As the space station falls it will begin to break apart and burn up in the atmosphere, but it's large enough that parts weighing up to 100kg may survive the descent. The most probable outcome is that they'll hit the ocean (which covers 70% of the Earth's surface) or uninhabited areas (which cover most of the rest).

But there's an outside chance that it'll crash-land in an area where people live, and it'll be impossible to predict, even in the hours before landing, exactly where it'll hit. Even slight changes in upper atmosphere weather could nudge it between continents.

In 1979, NASA's Skylab space station hit Australia during its own fall to Earth, and the Soviet Union's Salyut 7 space station followed suit over Argentina in 1991. Tiangong-1's successor, Tiangong-2, was launched in September 2016.