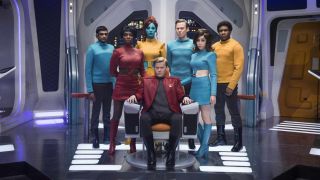 This article is brought to you by Total Film, the smarter movie magazine – we're cheeky, irreverent and probing, but always passionate and authoritative about film...

Save up to 43% on a subscription to Total Film this Christmas. Give the perfect gift that keeps on delivering.

Twisted-tech anthology series Black Mirror started out as a TV show, and has since spun off into a book (out next year), but don’t rule out further brand extensions, according to creator Charlie Brooker.

In an interview with Total Film magazine ahead of the launch of the new series on Netflix, Brooker first admits that he’s shifted his stance on an extended Black Mirror universe. “When people used to ask me, ‘Are these all set in the same universe?’, I’d go, ‘No.’

"I’ve now changed my position, and explicitly some of them are. And we’ve tied together several episodes in that story. But you don’t need to have seen any of those episodes.

“The basic rule is that you only have to watch one episode, if you want. But there are direct references to other things and other worlds and other stories we’ve done in that story.”

Talking specifically about the upcoming books, Brooker says he’s not dictating what the story ideas up, but is feeding back on his writers’ ideas. “It’s a different world. It’s its own separate thing, in a way, but it’s got to have shared Black Mirror DNA.”

And, when TF asks there are any other media Brooker would consider exploring Black Mirror in, he says, “Yes, games and comics are two worlds that I’ve thought about. It’s really getting the time that’s the challenge, at the moment. Because those are both things I can see us doing stuff in, but it would have to be right. I can’t say too much, but those are all things that I’ve thought about. There are other mediums and things that you contemplate.”

There’s currently no news on a launch date for series 4 of Black Mirror, but it’s expected to be on Netflix before the end of the year. You can find more on Black Mirror, including an on-set report from Iceland, inside the latest issue of Total Film magazine, which is on sale now.