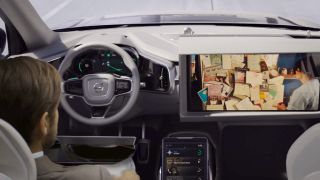 Tired of playing the license plate game on long car trips? Volvo announced today that it is teaming up with Ericsson to greatly boost the streaming capabilities of its self-driving cars to also automate in-car entertainment.

In their announcement, Volvo and Ericsson claim that streaming video will make up over 70 percent of mobile data usage in the coming years as more cars become connected and able to drive autonomously. The two companies are aiming to bring high-bandwidth capabilities to Concept 26, Volvo's current idea for a self-driving vehicle.

In addition to improved bandwidth, Concept 26's entertainment options are nearly as autonomous as the car itself. Predicting the length of your commute and utilizing nearby networks, Volvo's smart streaming service can bring you curated media to augment each particular trip.

For example, a quick trip downtown could take a route just long enough to watch an episode of your favorite show, while longer road trips could offer up feature-length movies to pass the time.

The system will also utilize "smart buffering," finding the right times and places to download data from available networks to ensure video quality doesn't dip or cut out over the course of the commute, especially in areas that might be sparse in reception.

"Imagine a highway full of autonomous cars with their occupants sitting back watching their favorite TV shows in high definition," said Anders Tylman, General Manager of Volvo's Monitoring & Concept Center. "This new way of commuting will demand new technology, and a much broader bandwidth to ensure a smooth and enjoyable experience."

While the full extent of this technology is still left to speculation, the team-up between Volvo and Ericsson could yield some interesting results. In the meantime, we wonder if people would intentionally take a longer commute from work just so they can catch an episode of Seinfeld.