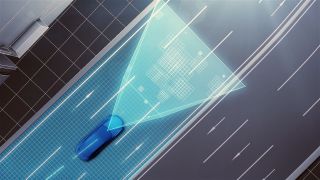 Toyota has some autonomous driving tech to show off at CES 2016 next month, but it may make some uneasy.

The company will unveil a new mapping technology that relies on production model self-driving cars' cameras and GPS to take real-time images of roads as well as vehicle positioning information.

"An understanding of road layouts and traffic rules (including speed limits and various road signs) is essential for the successful implementation of automated driving technologies," Toyota notes in its release. "Additionally, high precision measurement of positional information requires the collection of information on dividing lines, curbs and other road characteristics."

This new system will allow for more accurate and up-to-date mapping, Toyota claims, because it doesn't rely on dedicated vehicles equipped with 3D-laser scanners. Whereas that approach requires manual piecing together of images (which results in infrequent updates), Toyota's system will take the gathered intel and send back to data centers where it is automatically patched together, tweaked for accuracy and updated, allowing for current, "high precision" maps of a large area.

Interestingly, Toyota admits a system that relies on cameras and GPS has a higher chance of generating errors than one using laser scanners. Of course, it's thought of that problem and will prevent errors by using "image matching technologies" that cross-reference images from multiple vehicles along with "high precision trajectory estimation technologies." This should trim errors by 5cm on straight roads (we don't have any information for curvy ones).

The new tech won't make it to Toyota's autonomous cars until those production vehicles hit the road, and that won't happen until around 2020. Mapping will likely be limited to freeways to start, though that should expand to "ordinary roads" along with the ability to track driving hazards. The company says it wants to work with mapmakers so that everyone is using "high precision map data," not just Toyota.

Accurate maps that use real-world images and GPS information sounds like a promising concept, but for us, it raises concerns about privacy. Even though the system will be limited to production vehicles, what kind of imagery and information about other vehicles, homes or people will it pick up? Toyota makes no mention of privacy protection or security in its press release. We're not sure if those answers will be forthcoming at CES, but we'll be sure to ask them if we get the chance.