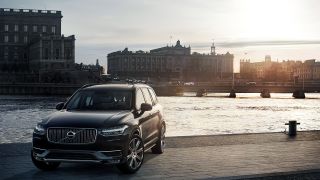 Volvo's XC90 R can't drive itself… but its successors might

The last time we heard from Volvo's head of R&D, Peter Mertens, he was colourfully calling bulls**t – literally – on self-driving cars on the roads within two years. So it's interesting that Volvo has announced an online press event tomorrow where one Peter Mertens, head of R&D at Volvo, is expected to announce its entry into the autonomous cars market with Volvo Drive Me.

"We are entering uncharted territory in the field of autonomous driving," says Mertens, "taking the exciting step to a public pilot, with the ambition to enable ordinary people to sit behind the wheel in normal traffic on public roads, has never been done before."

His colleague, Technical Specialist Dr Erik Coelingh, added in reassuringly sensible, Volvo fashion: "Making this complex system 99 per cent reliable is not good enough. You need to get much closer to 100 per cent before you can let self-driving cars mix with other road users in real-life traffic… We have a similar approach to that of the aircraft industry."

To this end, the Drive Me vehicles will feature multiple fail-safes and a huge raft of sensors, giving a 360-degree view of the car's surroundings. Technologies ready to be unfurled into Volvo's robo-rides include radar, cameras, a "multiple beam laser scanner", ultrasonic sensors, HD 3D digital mapping, good, ol' fashioned GPS and cloud-based processing systems for all this essential data.

Volvo is currently elbow deep in its "Vision 2020" project, an enormously compelling pledge to the world hat there will be no road deaths in new Volvos from that year. Which is, of course, just five years hence. So it's quite some thing and, in fairness, more an "intention" than a cast-iron guarantee – that would be foolish.

They plan to do this with a raft of technology currently being implemented into their high end automobiles, with their handsome 2015 XC90 SUV literally bristling with sensors and leading the charge.

Stick your £45k down on an XC 90 and you can expect industry leading safety tech in their proprietary a run-off road protection system and auto brake at intersection capability.

The run-off road protection system has sensors which detect that the car is currently heading towards a ditch and tightens the front seat belts, while energy-absorbing functionality between the seat and seat frame cushions the vertical forces on the spine when landing on hard terrain.

This helps prevent spinal impact damage, the most common injury in this accident scenario. While a lane keeping aid adds extra steering torque if the car is sensed to be veering out of lane, to stop the accident happening in the first place.

Why is this important? Because Volvo assert that half of all traffic fatalities in the United States are road departure accidents and single-vehicle accidents involve one third of all fatal and severe injury crashes with passenger cars in Sweden.

The XC90 is also, Volvo claim, the first car in the world with technology that features automatic braking if the driver turns in front of an oncoming car. A common incident at city crossing and highways, the car detects a potential crash and brakes automatically, mitigating or hopefully avoiding any smash. Cameras also detect quick braking cars on roads and motorways, even bikes that veer suicidally in front of your bonnet, apply brakes immediately.

So tune in tomorrow to see how Volvo's entry into autonomous driving is framed.