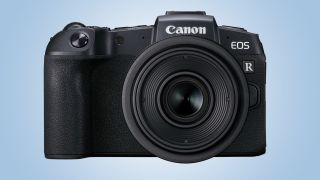 The model arrives just five months after the launch of the EOS R, the first camera in the series. Aimed at the more novice user looking to step up to full-frame photography, the model has the honor of being not only the smallest interchangeable-lens camera with a full-frame sensor to bear Canon’s branding, but with a weight of just 485g with a battery and memory card in place, it’s also the lightest by some margin.

Furthermore, with an asking price that’s less than half of the EOS R’s, it presents a more accessible option for budget-conscious users keen on adopting the EOS R system.

The EOS RP brings together a 26.2MP full-frame sensor with the same RF lens mount that features on the EOS R. The sensor bears the same total and effective pixels as the one inside the EOS 6D Mark II DSLR, although Canon has said that the version here is slightly different (presumably to support 4K video recording).

The RF mount in front of the sensor accepts a limited number of lenses right now, although Canon has separately confirmed the development of further RF-series lenses that will shortly become available, which should bring the total number of native options to 10 by the end of the year.

In the meantime, users are also able to mount an exhaustive number of EF and EF-S lenses from Canon’s EOS DSLR stable via one of three EF-EOS R adapters, and the model will be made available with the most basic of these adapters as standard.

Image stabilization for stills is only available when using a lens with this technology in place, although an additional bonus of using such an optic is that the camera will provide information from the sensor to deliver better correction over blur, a previously-seen partnership known as Dual Sensing IS.

The EOS RP’s 26.2MP sensor provides a native sensitivity range of ISO100-40,000, although extension settings alongside boost this to settings equivalent to ISO50 at the lower end of the scale and ISO102,400 at the other extreme. Processing is handled by the same DIGIC 8 engine as the EOS R, while raw files can be recorded in the most recent CR3 format, which shaves 40% off the size of standard files.

This processing engine also allows the camera to record 4K footage to a maximum 25fps, as well as Full HD videos to 60fps. This is bolstered by 3.5mm ports for both headphones and microphones, together with a range of video-specific functionality, from 4K timelapse shooting and a Video Snapshot mode, through to Movie Servo AF and a five-axis Movie Digital IS option that provides (electronic) compensation over shaky footage.

The longstanding Digital Lens Optimiser correction feature is also on hand to help improve sharpness when capturing images at smaller apertures, as well as to offset the effects of the low-pass filter, and this can be used across RF and EF lenses registered to the camera.

Built-in Wi-Fi and Bluetooth, meanwhile, make it possible to operate the camera with a smart device using the Canon Connect App. This app also allows for GPS information to be embedded into images captured on the EOS RP, while a separate Canon DPP Express app can be used to import raw files for processing on smart devices.

Metering is handled by the main imaging sensor, with 384 separate zones used for measurement, and this provides the familiar evaluative, center-weighted average, spot and partial quartet of patterns. A silent shooting mode is also on hand, although this appears to mirror the option on the EOS M50 in being confined to a scene setting, rather than available as an option the can be called upon regardless of exposure mode. It’s not clear whether this will allow any extension to the shutter speed range allowed by the mechanical shutter, which has a maximum shutter speed of 1/4000sec.

Familiar focusing features on the EOS RP include Canon’s well-established Dual Pixel CMOS AF system, which uses phase-detect AF pixels on the main imaging sensor to perform autofocus. This system is also at the heart of face detection and Eye AF, the latter keeping a lock on the subject’s eye to ensure it remains in focus. Dual Pixel CMOS AF works for both stills and videos, although videos captured at a 4K resolution can only make use of contrast-detect AF.

It’s possible to call upon 4779 individual AF points, which cover 88% of the horizontal area and 100% of the vertical stretch. Spot AF, used for focusing on particularly small subjects, and focus bracketing for macro work can also be called upon where required.

Images can be captured continuously at a maximum rate of 5fps, although this drops to 4fps when shooting with Servo AF activated. Impressively, Canon claims that with a fast UHS-II memory card in place the camera will essentially provide an unlimited buffer, whether you’re capturing raw files or JPEGs.

The EOS RP’s electronic viewfinder isn’t quite the same as the panel on the more senior EOS R, in that it’s been designed with a 2.36 million-dot OLED panel rather than the familiar 3.69 million-dot alternative. Likewise, its 0.39-inch size and 0.7x magnification should provide a smaller view than the EOS R’s 0.5-inch panel with its 0.76x magnification, although it does at least match it in providing approximately 100% coverage of the scene.

The viewfinder is joined by a 3-inch vari-angle LCD that can be pulled out and twisted to face in different directions, including all the way round to face the front. This screen is touch-sensitive, enabling the user to set the focusing point when composing images and videos through the LCD screen, although additional support for the Touch and Drag AF feature – whereby the user can swipe the screen with their thumb to the chosen point of focus while using the viewfinder – can also be used where necessary.

Touch sensitivity extends to other parts of the camera’s operation, such as swiping through and zooming into captured images, as well as for the adjustment of camera settings in the Quick menu, among other things.

Canon has designed the EOS RP’s body with magnesium alloy paneling for rigidity and lightness, with aluminum, polycarbonate resin and glass fibers used elsewhere. Reassuringly, seals on the inside provide protection against both dust and moisture, which isn’t something we always see on models aimed at more novice users.

In further good news, Canon has decided to drop the EOS R’s awkward M-Fn bar for this new model, while there’s a single card slot for SDHC and SDXC cards rated to UHS-I and UHS-II specifications on the side of the body. Disappointingly, the camera looks set to offer just a 250-shot battery life, which is relatively weak even for a mirrorless model.

Canon has also confirmed that it’s developing a new superzoom optic for the range, the RF 24-240mm f/4-6.3 IS USM, which combines a 10x optical zoom range with an Image Stabilizer. Aimed at the traveling photographer, it joins five other lenses set for release throughout 2019.

The EOS RP is set for release on February 27, with three configurations confirmed, although availability of these varies by region.

Curiously, Australia does get a body-only option, which is priced at AU$2,099, while the Mount Adapter bundle ups the cost slightly to AU$2,149.