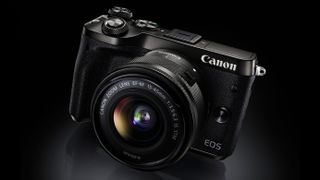 If rumors of the second generation EOS M5 and EOS M6 snappers launching on August 28 are true, we may be seeing a compact mirrorless camera with a pretty remarkable spec sheet.

Canon Rumors has managed to lay their hands on a batch of specs for the potential EOS M6 Mark II and, if there’s any truth to them, the Japanese manufacturer will be introducing us to brand new sensor technology to help improve the camera’s dynamic range.

The M6 II is rumored to boast a 32.5 APS-C CMOS sensor working alongside a Digic 8+ image processor. If this comes to pass, that would be an improvement over the original M6’s 24.2MP sensor and Digic 7 engine.

Continuous shooting will also likely see an improvement of the previous 7fps burst speed to a rather impressive 16fps. We’ll also likely see a jump in the electronic shutter’s speed from a meagre 1/4000th of a second to a lightning 1/16000 second.

It’s all about video

Where the original M6 only had 1080p video capabilities, the second generation model is rumored to arrive with uncropped 4K recording at up to 30fps.

If you thought that was the only marked improvement to the old spec sheet, think again. The M6 Mark II will also apparently get brand new modes dedicated to selfies and vlogging.

In addition to those, there’s said to be a new Movie Picture Style, but the M6 II won’t come with Canon Log (which is a standard part of the camera maker’s EOS Cinema range designed to capture more details in shadows and bright areas of the frame – aka the dynamic range).

It has also been suggested that Canon may improve image stabilization for smoother video recording.

Everything else in between

Dual Pixel autofocus is a part of Canon’s, well, canon and the original M6 did take advantage of the technology, so we’re quite sure it will find its way into the Mark II as well. Eye detect and tracking may also be a possibility but that is pure speculation at the moment.

The leaked specs suggest the M6 will support an external viewfinder and charging the camera will be via USB-C.

All this, though, is unconfirmed, as is the possible launch date, so do take this with a large pinch of salt. If, however, any of these specs are true, the EOS M6 Mark II does seem like it will outdo its predecessor in every way.