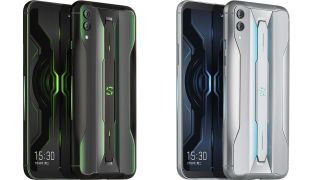 Black Shark, one of the early names in smartphone gaming brands has announced the Black Shark 2 Pro at an event in Beijing. The successor to the Black Shark 2 is powered by Qualcomm Snapdragon 855+ chipset and has got a revamped design. It looks more futuristic than ever and comes in a bunch of new colour options including  electric black, ice ash, blue, orange, purple.

Mr. Peter Wu, CEO of Black Shark Technology, said “Black Shark will take the advantage of the gaming phone, user habits and multi-typing gaming optimization schemes as the breakthrough, to create a gaming open platform. At the same time, Black Shark will open the actively optimized portal for game producers, which can jointly improve the player’s gaming experience.”

The Black Shark 2 Pro features a 6.39-inch Full HD+ (2340 x 1080 pixels) AMOLED display with a 19.5:9 aspect ratio. The screen is calibrated to reproduce 100% of DCI-P3 colour gamut. It is also the first phone to have a 240Hz touch response rate with 34.7ms latency. However, the screen only supports 60Hz refresh rate. In comparison, the recently announced Asus ROG Phone II has a 120Hz panel though the touch latency is slightly higher at 49ms.

The body of the phone is made from aluminum and measures 10.07mm at its highest point and weighs in at 205g.

Black Shark 2 Pro is powered by Qualcomm Snapdragon 855 Plus chipset which was unveild earlier this month. The 855+ has been overclocked to 2.96GHz and is paired with Adreno 640 GPU. This is backed  by12GB RAM with 128GB/256GB storage options.

It has a dual-camera setup which consists of a primary 48MP Sony IMX586 sensor and a 12MP telephoto lens which enables 2x optical zoom. There’s a 20MP camera on the front for selfies.

The phone is fitted with stereo speakers and there’s a fingerprint sensor under the display.